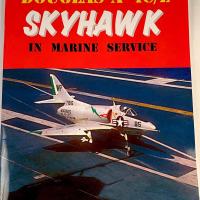 This book is the seventh book in Ginter’s Naval Fighters series and looks at the 23 Marine Corps units that flew the A-4C/L Skyhawk. The book opens with a brief discussion of the development of the A-4C as an all-weather version of the Skyhawk and some of the structural changes that were made to accomplish this. While the A-4C was intended as an interim design, 638 aircraft constructed.

I enjoyed the book as I was not aware that so many Marine units flew the A-4C. The crisply printed photographs and the informative captions provide a lot of incentive to build a Marine Scooter, so now it is off to raid the kit stash to see if I have one!

Recommended! Thank you to Ginter Books for the review sample and to IPMS-USA for letting me review it.