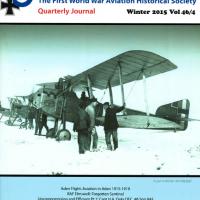 The latest journal of Cross & Cockade International - Winter 2015, features a photo of Armstrong Whitworth F.K.8 B-291 of 15 TS in the snow during winter 1917-18 on the cover. The rear cover shows the result of an apparent RAF B.E. 12b collision just outside Penston aerodrome on April 28, 1918. This issue also includes a separate A2 size sheet in color covering Ordnance Survey maps that are marked up with the location of WWI aviation interest sties in Ireland. The back of this foldout provides maps showing RAF Areas and Groups for April 1918, November 1918, June 1919, and January 1920.

Note: The $40 price is for the 4-issue subscription.

The featured articles are all well done, supported with photos, drawings, and maps as appropriate. Indeed the first article, Ian Burns’ Aden Flight, is 20 pages featuring 37 photos, a map, a bibliography, and 33 notes. This article is about the British capture of Aden (now Yemen) that at the time was under the Sultanate of Lahej. If you are in to history and all its detail, it’s all here. A few of the articles are in parts like Stewart Taylor’s piece, Uncompromising and Efficient: Capt H.A. Oaks DFC, 48 Sqn RAF, that was initiated in the previous issue. Paul Leaman’s series on the Atlas of German and Foreign Seaplanes focuses on the Ago Seaplanes this issue. If you thought there was only one Ago Flugzeugwerke aircraft, be prepared to learn some more about the other twenty-seven airframes.

Mick Davis’ Fabric is basically a ‘letters to the editor’, providing updates to previous articles in the journal from authors and readers. The Bookshelf section is a review of WWI aviation specific books and magazines with this issue totaling thirteen.

Its another great issue from Cross & Cockade and I’m quite impressed with the quality. If you are in to early / WWI aviation, this journal is an incredible source of information that will have you on the edge of your seat for the next issue.

My thanks to Cross & Cockade International and IPMS/USA for the chance to review this great issue.