Lockheed-Martin C-130 Hercules, Flying with Air Forces Around the World 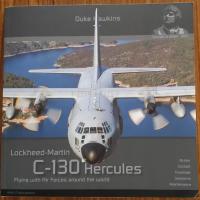 The first flight of the famous C-130 “Hercules” turboprop aircraft was on August 23, 1954, with the first production C-130 making its maiden flight on April 7, 1955. The aircraft has been in continuous production since, with over 2500 manufactured to date.

Written by Robert Pied and Nicolas Deboeck, this incredible book is an invaluable resource for modelers. Its 196 pages with over 550 photos show the C-130 in incredible detail. Photos of the interiors of the wheel wells, many open panels, and interior photos that show parts of the “Herk” that, until now, mostly maintainers saw. I was a maintainer (also known as a “Crew Chief”) who worked on C-130 “Herks” for over 25 years, and this book brought back many memories.

The flight deck is photographed in detail, with photos showing the circuit breaker panels and navigator’s station – items that are too often left out of books. Literally every instrument or circuit breaker panel has been pictured, with differences between models of the “Herk” shown as well.

Onto the exterior of the aircraft, there are dozens of phots of panels removed to show the systems that run the aircraft. There are even some pictures of the wing’s leading edges off! The flapwells are also photographed, along with incredibly detailed shots of the flaps themselves.

Overall, I really enjoyed this book and consider it an essential book for both modelers and C-130 fans worldwide.