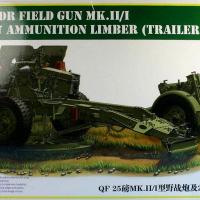 This kit is a representation of the 25 pdr field gun used by the British Army during WWII. The original design was for a field gun designated as Mk II. It replaced two WWI field guns. In 1943, an anti-tank round was designed for the gun and a muzzle brake was required due to the higher muzzle velocity. This was designated as Mk II/I if modified, and Mk III if built from production. This gun served with all British and Commonwealth forces during WWII, Korea, and into the 1990’s.

This is a multimedia kit but the use of the PE is required, there are no optional plastic parts. Please be aware that some of the plastic parts are very, very small and will take a steady hand to get them off of the sprue without damage. And, when they are off the sprue, these minuscule parts do their very best to hide or get lost in the carpet or even on the work table.

Before starting the model, you need to decide how you want to display the gun, either in travel mode or firing mode. Then you have to decide between Option 1 and Option 2. The only difference that I could determine between these two options was small variations in the gun mounts and the number of bolts displayed. Then you will need to determine which barrel you want to use. I choose the late version with the muzzle brake and counter balance. The instructions are fairly clear on what to do on each version. I built mine in the firing mode Option 1 version.

The color charts shows the reference numbers for Tamiya, Humbrol, Mr. Hobby, and Mr. Color. The paint schemes and associated decals are as follows:

The general paint scheme is overall dark yellow or dark green with no other camouflage colors. The paint schemes for the trailer appear to come from museum pieces as there are numerous items painted red. I’m not sure that this is a proper paint scheme; you will need to check your references to help you decide what to do.

The decals are for the ammo and ammo boxes and just a few for the gun. The kit provides 32 shells, and has plenty of decals for the rounds. A name plate goes on the inside of the splinter shield and numbers go on the aiming sticks. They have no manufacturer's name other than Bronco, so I have to assume that Bronco produced them themselves. They appear to be in register but they are stiff. To get the decals to lie down on the ammo took several coats of Solvaset.

The build is at an Intermediate/Advanced level with very good detail and some exceptionally small plastic parts. The molding is crisp, with no flash and minimal mold lines. I can recommend this kit to all artillery fans.

I would like to thank both Dragon Models USA and IPMS-USA for providing the kit for building and review.