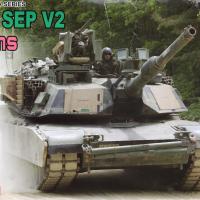 The M1 Abrams tank is one of the world’s best know, easily recognized and most lethal main battle tanks, and has seen combat throughout both the Iraqi and Afghanistan wars. One of the latest versions is the M1A2 SEP V2. ‘SEP V2’ stands for System Enhanced Program and ‘V2’ denotes Version 2.

There are numerous URLs & sites dedicated to both the SEP V2, a great deal of public information and photographs available to assist the scale modeler in construction and finishing of this tank.

This is a great kit, providing not only the basis for the updated versions of the Abrams, of which over 5100 examples have been built since the M1’s were first produced in 1978.

Not to be outdone by either their earlier issues of the M1 kits nor those of their competitors, Dragon has raised the bar even further with this M1A2 SEP V2. What’s different in this kit?

As an admission of guilt—I have previously built another Dragon M1A2 kit, enabling me to observe that there appears to be increased amount of flash on this issue that didn’t appear on earlier kits of this tank. By my count, there are at least 9 different issues and reissues of this kit beginning in 1992. Even the smallest of rivets and bolt heads are included and accurately represented in this version of the M1A2.

One of the only very noticeable drawbacks on Dragon kits are not the amount of detail contain (which remains as outstanding), but the instruction sheets. One has to be very mindful to insure that the parts are assembled in the correct sequence and as shown on the instructions. I found that at several places I had to check and recheck the fit and parts placements to insure that I had them correctly located.

While discussing the instruction sheet; a word of caution about the parts numbers on the sheet, which are sometimes not correctly numbered.

The upper deck has a large number of pieces, which seems overcomplicated in my opinion: there are 7 separate pieces to cover the hull top after deck area (in addition to several pieces of PE and the drivers hatch). Fitting them requires some patience and gluing in sections and appears to be more demanding than might be with one large deck section. And the turret will still touch and drag across the hull top when turning—the tolerances are very tight.

Installing the Chobham side skirts proved to be one of the most challenging aspects to the kit construction. I had to file down the rubber front fenders in order to make the fit reasonably close.

I somehow wound up with about 1+ inch of extra tread, which I covered up using the side skirts (mentioned above); in retrospect I would have been able to just shorten the track length on each side. It is a curious note however, since these are the DS tracks, which I love because they take a variety of paints and take most modeling cements beautifully.

Attaching the complicated bustle racks is also a bit challenging as you will see in the attached images, though once constructed, including the small sheets of photo-etch, is eye catching and delicately reproduced. Based on photos located on the Internet, the turret detail is very accurate down to the smallest details.

The amount of detail is almost too much—with over 580 parts. More importantly, the surface detail, including the non-skid surfaced displays a very realistic pattern.

I used a combination of Vallejo and AK primer and paints in the finishing of this kit. I am still learning the techniques involving acrylics and this kit afforded me the perfect opportunity because the Abrams is basically one color. In my example I primed the surface with AK Interactive ‘Desert Sand’ (#AK 181) and have settled on Vallejo Air ‘IDF Sand Grey 73’, (#71.141). Over the entire surface I used AK Enamel Wash ‘OIF & OEF’ (#AK 121) which provides a great base for my weathering efforts. One other color observation: there is very little ‘detail’ color information; while the overall colors are spelled (using only Aqueous Hobby Color, Mr. Color or Model Master referenced colors) none of the numerous small details are color coded or spelled-out. An example, the fuel or water containers, ammo cans or the very small smoke cartridges lack any color references—I think. I say I think because they may be called out in Kanji, which I unable to read or discern.You may also notice that I have yet to add the Combat Identification Panels (CIP) to the model as intend to add additional weathering after I finished the basic model.

The decals provided in the kit include those for several Army units based in either South Korea or Germany. These are printed by Cartograf, with the registration and printing very detailed, including several items in ‘handwriting’ styles. I have held off applying any decals since my plan is to use a third party decal sheet.

For what I believe is the definitive M1A2 SEP V2 kit, I strongly recommend this kit. With the myriad of Abrams kits on the market, none are as faithful in their detail as is this kit. Thanks to Dragon for this great new kit of the Abrams and to IPMS-USA for the opportunity to review and share my comments with our readers.