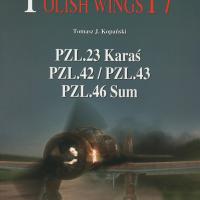 This book takes a look at the most famous of the Polish bomber type in WWII and its developments. The PZL 23 was known as the Karas (or Carp, according to Google translation) to the Polish Air Force and, along with its offshoot variants PZL 42, 43 and 46, did the lion’s share of bombardment work for Poland.

The majority of the book (65 pages) gives us a brief history of the main variant, the PZL 23, and its service with both Poland and Romania. There are many previously unpublished black and white photos used to illustrate this aircraft, along with gorgeous color profiles. The Poles had some of the best group insignias I have ever seen. Who could resist doing a model of a Karas with a flying fire breathing dragon with a bomb clutched in his talons?!

The next 22 pages contain a brief discussion of the one-off PZL 42 (2 pages). The export version PZL 43 Chayka (Seagull) was Gnome-Rhone-engined stretched fuselage version of the Karas. This variant was used primarily by Bulgaria. These versions provide some of the most colorfully marked variants, especially those from 1939. Lastly, the successor to the PZL 23, the PZL 46 Sum (Catfish), is discussed, including its escape to Lithuania where it was grounded when that country was occupied by the Soviet Union, and to its final listing as an aircraft captured in Russia by the Germans.

The book concludes with what very well may be the best part for the modeler— matching the Polish, Romanian, and Bulgarian colors to FS numbers. These colors, especially the Polish ones, have always be the subject of a lot of speculation. The authors have used surviving aircraft relics to match the colors and have even been able to show that the elusive Polish Khaki was in reality three different shades. This section will prove very helpful, and its presence alone can make the book worth the asking price to modelers of WWII aircraft.

This was a very interesting book! The photos and gorgeous color profiles are most enjoyable. They will help modelers in any scale. I only wish I had had this book when I built my 1/48 Mirage PZL 23! The only drawback to this book is the absence of any interior photos, and their inclusion is the only thing that could have made this book even better. I can still recommend this book to anyone interested in WWII Polish aviation, WWII aviation in general, and the WWII aircraft modeler. It gives a good look at one of the lesser known combat aircraft of World War II. It’s available in the USA from Casemate Publishing at http://www.casematepublishers.com