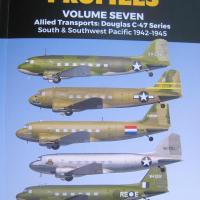 This book is part of a series of volumes on World War II in the Pacific, the author having published numerous titles dealing with American, Australian, New Zealand, and Japanese aviation activities during the war. He is Australian, and has lived in the areas under discussion, and is also a pilot, so has the background to treat the subject accurately.

This particular volume discusses the Allied effort to provide air transportation in the South Pacific, identifying the units of the American, Australian, and New Zealand units. Of course, the Douglas DC-3 and C-47 variants were active in all areas where the Allies operated, and as well, the type had also been produced in Japan, with the type being operated in small numbers by the Japanese. These operations are not mentioned in the book, but the C-47’s were aided by Lockheed lodestars and other transport types. The detailed reporting only covers the role of the C-47 in these combat areas.

The author covers these activities by discussing each unit individually, telling the type of aircraft used, their usual camouflage and markings, their crews, their specific operations, and the losses incurred. Accompanying each unit coverage is a series of color profile drawings, identifying specific aircraft and showing their individual markings and identification systems. One very impressive part of the book is th series of color and black and white photos, most taken during wartime. With the author’s list of sources, it is understandable how he has managed to accumulate such interesting photos. This book is designed to be especially useful to modelers, although no mention is made of DC-3/C-47 models available in scale, or of decal and marking sets produced for the type.

The book gives relatively complete coverage of each unit that operated the C-47, telling the source of the unit, its actions during the war, and the location of its operations. Losses are described, and they tended to be much higher than most previous accounts of these actions have described. One impressive feature of the book is the series of drawings, which provide accurate drawings showing the engine and cargo door arrangements for each variant, with photos in many cases accompanying the drawings, verifying the markings provided.

This is a very interesting book to read, as it tells a story that few have heard before. The photos are excellent, and the colors are very impressive. I didn’t realize that so many color photos were taken during the war. Now I am tempted to obtain some of the other volumes, as the author has done some titles that sound very interesting.

This book is certainly worthwhile getting. Don’t miss out on this one.

Thanks to Bill O’Malley and Phil Peterson for the review copy, and also to Avonmore Books.

This is actually a terribly inaccurate book, both in the text and the profile artwork, at least insofar as Marine Corps and 13th Air Force units are concerned (the profiles themselves are also poor representations of the C-47, with the nose, engine cowls, and rudder being particularly egregious).  Furthermore, the author displays both a fundamental lack of knowledge about the aircraft itself, including the assertion that C-47s did not possess glider towing apparatus, and of the command structure that is much of the book's focus, including depicting Marine Corps units as operating under 13th Air Force control.  The fact that much of this history is obscure should not be a license for inaccuracy.  I served as the historian for the veterans' group Marine Air Group 25 and SCAT Veterans of WWII and maintain the group's archives and website.