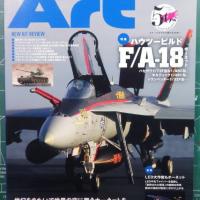 Model Art Modeling Magazine is an excellent monthly from Japan providing an abundance of modeling subjects in each issue. It doesn’t matter what your modeling focus is, each issue will provide something of interest for you, and more than likely, you’ll find something interesting that you didn’t know you would.

The magazine is published in Japanese, but even if you can’t read Japanese, the photography is really fantastic and the old saying “a picture says a 1,000 words” is very true. Each issue includes enough “work in progress” photos for even a layman to be able to follow along. The photos of the builds highlight many of the tools, materials, and techniques used by the master builders for each model built. Although, I’m sure something is lost in translation, the photos go a long way in explaining the builds visually. Honestly, sometimes I find myself spending as much time looking at the many advertisements as much as I do on the work in progress photos.

The main theme of the August issue, is building the F/A-18 Hornet. The magazine includes quite a number of articles focused on building a variety of types of F/A-18s in a variety of scales. This includes builds of Hasegawa’s 1/48 F/A-18C in VFA-192’s Golden Dragons’ theme; Hasegawa’s 1/48 F/A-18D, which was completed in 18 hours; Kinetic’s 1/48 F/A-18C built in VFA-87’s Golden Warriors’ theme; Hasegawa’s 1/72 F/A-18F Super Hornet in VFA-103’s Jolly Rogers’ theme; and the Trumpeter 1/32 F/A-18F Super Hornet. In addition to all of these build articles, there are some additional Hornet/Super Hornet articles in this feature including 18 facts about the F/A-18; how to paint the F/A-18; and a comparison of three F/A-18 kits. The build articles are interspersed with photos of the real F/A-18’s in action too.

Each issue has a few “New Kit Reviews”. These reviews include complete builds of each kit, with plenty of photos. The new kits reviewed in this issue include the Aoshima 1/72 Kawasaki Ki-61 Hien, which the allies called a “Tony”; Zoukei-Mura’s 1/32 Dornier Do-335A-0 Pfeil; Tan Model’s 1/48 RF-84F; Fine Molds 1/35 JGSDF self-propelled 106mm; Tamiya’s 1/35 AMX-13; and Meng’s 1/35 ZSU-23-4MZ anti-aircraft gun. It’s not all about military models though, this month’s issue includes a few car builds and a really nice diorama featuring two of Aoshima’s 1/72 fire engines.

The diversity of subjects, combined with the quality of the photography easily makes this publication a highly recommended item.

Thanks to Model Art for making this publication available to IPMS/USA for review.