Bombers at Suez – The RAF Bombing Campaign During the Suez War, 1956 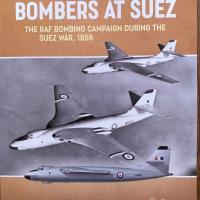 The book is volume 38 of Helion & Company’s Middle East@War series and looks at the participation of RAF’s medium and heavy bombers in Operation Musketeer, the Suez War of 1956. The book includes over seventy black and white photographs and seven pages of color profiles depicting the markings of some of the Canberra and Valiant squadrons that participated in the campaign and aircraft of the Egyptian Air Force, along with several maps and order of battle charts.

John Dillon is a former Vulcan navigator and the author of several military history books.

An often-overlooked part of the Suez War of 1956 is the participation of the Royal Air Force’s Canberra medium bombers and Valiant heavy bombers in the campaign. Based in Malta and Cyprus these aircraft were tasked with neutralizing the Egyptian Air Force in order to prevent it from interfering in the eventual assault that was planned to take back control of the Suez Canal.

While the book includes a good discussion of the actual bombing missions conducted by the RAF, most of it deals with the problems the RAF had in preparing for a conventional air campaign in an era when its primary mission and the focus of its training was to deter Soviet aggression and to bomb targets in Eastern Europe and the Soviet Union, primarily from high altitude with nuclear weapons. As a result of this complete 180-degree change in mission, the RAF had to quickly develop new tactics and procedures to enable it to conduct conventional bombing missions over Egypt. Surprisingly, the tactics that were eventually developed looked a lot like those used by the RAF in World War II with the RAF returning to night bombing, using Canberras as “marker aircraft” to go in ahead of the bombers to mark the target and a Master Bomber to control and direct the actual bombers. Unfortunately, unlike World War II, the marker aircraft were not followed by several hundred bombers, but most often by a just a handful of aircraft. In addition, as the RAF airfields on Cyprus did not have the capacity to hold all of the Canberras deployed to the region, many of them were based in Malta and as this was long before the days of aerial refueling, they carried reduced bombloads in order to allow for more fuel to be carried and to increase performance.

The book includes a good discussion of the politics behind the RAF’s Suez bombing campaign and the effect the political issues had on the planning and execution of it. The author also points out the limited effectiveness of the bombing, as it only lasted six days with almost 2,000 bombs delivered in 18 strikes, less than would have been dropped on a minor target at the end of World War II.

The color profiles are very well done and illustrate the markings of many of the squadrons that participated. The captions are very informative and there is a good description of the marking bands applied to the Canberras for Operation Musketeer. There are also profiles of some of the Egyptian Air Force aircraft of the period, including Meteor NF.Mk.13 night fighters that the RAF was concerned could be used against its bombers.

I enjoyed this book and it gave me some insight into Operation Musketeer as while I had heard about air strikes conducted by tactical aircraft of Israel, France, and England, I was unaware that the RAF also employed its Canberras and Valiants as well.

Highly recommended. Thank you to Casemate Publishing for the review sample.