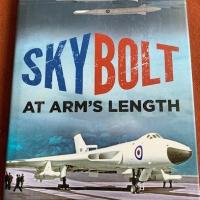 In the aftermath of World War Two, the United States and the Soviet Union were not the only powers who pursued and developed nuclear weapons. Both France and England pursued the development of nuclear and thermonuclear weapons after World War Two. The problem came in developing reliable and effective methods of deploying these weapons. In the immediate aftermath of World War Two, prior to the missile age, the only option was the manned bomber. Unfortunately, as antiaircraft systems became more effective and sophisticated, questions began to arise with respect to the ability of the manned bomber to penetrate these defense systems and reach their targets with gravity bombs.

While the 1950’s saw the development of England’s V-Bomber force with the Valiant, the Victor and the Vulcan, the British government also realized that the continued development of surface-to-air missiles to augment traditional anti-aircraft guns meant that it needed to look at options to allow its bombers to stand-off from their targets and avoid penetrating very heavily defended target areas. The increasing reliability, capabilities and accuracy of ballistic missile systems also raised issues of the survivability of the V-bombers based in England.

Skybolt – At Arm’s Length examines many of these programs looking at the pro and cons of the systems as applicable to England as well as the political climate in which they were proposed and developed. Mr., Hill also steps back and discusses issues that were apparently glossed over as the British military and government strove to find an acceptable solution, such as overlooking the fact that unlike the United States, England would only have a few minutes warning of a ballistic missile attack, so unless England kept a substantial portion of if V-bombers on airborne alert at all times, very few would ever get airborne at all.

In order to increase the survivability and lethality of its V-bombers, England approached the United States about being allowed to participate in the development and deployment of the Skybolt air-launched ballistic missile. Unfortunately, as the Skybolt was being developed for employment on the B-52, many aspects of its design caused issues for its use on the RAF’s Victors and Vulcans which would have required a lot of modifications either to the carrier aircraft or the missile itself. However, as it became clear that other options were not feasible, England placed more and more reliance, both militarily and politically, on Skybolt being the solution for England. The cancellation of Skybolt by the Kennedy administration in the early 60’s caused a panic for British military planners and a political rift between England and the United States which was only partially resolved when the United States agreed to provide England with the Polaris submarine-launched ballistic missile system

Mr. Hill examines both the military and political discussions surrounding the Skybolt affair using contemporary documents prepared by many of the high-level participants in these discussions and offers an interesting peek into the workings of the British government and military at the time. He also includes an interesting chapter discussing what British options might have been had the United States not provided England with the Polaris system.

For those interested in British military and political strategies and thinking of the late 50s and early 60’s this will be an interesting read. For modelers there are also some interesting illustrations of some of the weapons options that were proposed and examined for the Victor and Vulcan bombers along with photographs of mock-ups or test examples of some of them on Vulcans, Victors, B-52’s and even one on a B-47.

I enjoyed the book and recommend it to those interested in British nuclear policy and weapons research and development in the late 50’s and early 60’s.

Thank you to Casemate Publishing for the review sample and to IPMS/USA for letting me review it.