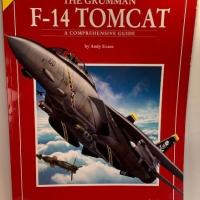 This is an updated version of SAM Publications earlier book on the F-14 Tomcat. The book starts with a brief history of the origins of the F-14 and has separate chapters for each of the three variants of the Tomcat, the F-14A, F-14A+/B, and the ultimate Tomcat – the F-14D. Each chapter includes descriptions of each variant, covering things such as the avionics, air-to-air weapons, and other systems for that variant. The chapters are lavishly illustrated with mostly color photographs illustrating many of the squadrons that operated the Tomcat and each chapter includes a listing of the Bureau Numbers for that variant.

When it was designed, Grumman assumed that the Tomcat, like the F-4 Phantom, would also be used as a bomber and even the original F-14As had air-to-ground systems incorporated, including a wing-sweep setting for “bomb”, however it would be almost 20 years before this potential was tapped into. Mr. Evans devotes an entire chapter to the evolution/conversion of the Tomcat from a fleet interceptor/dogfighter into a true multi-role aircraft with the development of the “Bombcat”. The chapter includes a lot of excellent photographs of different ordinance loads for the F-14.

As expected, there is a separate chapter discussing Iran’s purchase and employment of the F-14 with color photographs of several of the paint schemes applied to the Iranian Tomcats. The chapter also includes a brief discussion of F-14 operations in the Iraq-Iran war and Iran’s efforts to find new air-to-air weapons to replace the AIM-54 Phoenix, including converting Hawk SAMs into air-to-air missiles.

Next is a chapter on flying and fighting the Tomcat from an aircrew perspective which is accompanied by numerous photographs of the F-14 operating from carriers. This is followed by a chapter discussing the Tomcat’s combat career from the Gulf of Sidra through operations in Afghanistan and Iraq.

The final chapter discusses the retirement of the Tomcat in 2006 and the destruction of most of the airframes and spare parts to prevent Iran from obtaining spare parts for its Tomcat.

There are seven pages of color side profiles and one of upper and lower views illustrating many of the paint schemes and squadron markings seen on the F-14 over the years. This section is followed by eight kit builds – 1 in 1/32, 2 in 1/72 and 5 in 1/48. The builds are excellent, impressive, and illustrate many different techniques and styles.

Finally, there are 7 appendices covering things such as a walk-around of the aircraft, excerpts from the F-14 technical manuals, Tomcat colors, special test Tomcats, 1/72nd scale plans, and an extensive listing of Tomcat kits, accessories and decals.

This book is good overview of the F-14 and its three variants and includes lots of great information and photographs. The color profiles and kit builds offer inspiration for some interesting aircraft and the walkaround photos will help those who must super-detail their gear wells and doors. I noted just a few errors in the text, such as stating the only squadrons that operated the F-14D were VF-2, VF-11 and VF-31 while including a lot of photographs of VF-213’s F-14Ds, but they do not detract from the rest of the content.

As I also own the original issue of SAM Publications Modeler’s Data File on the F-14. I compared the two and noted that while there is some new material in this volume, primarily the kit builds and some of the appendices, most of the text and photographs in this volume are from the original volume, just re-arranged.

I highly recommend this book to anyone interested in the F-14. However, if you own the prior volume you may want to peruse this new edition first to see if there is enough new information to make it worth your while.

Thank you to SAM Publications for the review sample and to IPMS-USA for letting me review it.