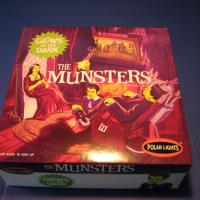 In September, 1964, a strange TV show appeared on our sets, The "Munsters". Using classic horror film characters as a base, the macabre humor of these frightening creatures with wise cracking dialogue, outrageous visual gags and fast motion cinematography made this show a hit. The show lasted 2 years (70 episodes) and was cancelled in May, 1966 due to an All New Color Batman taking all the ratings. It still can be seen in syndication and enjoyed by all.

We have Herman (played by Fred Gwynne), Lily (played by Yvonne DeCarlo) as his loving wife, Grandpa (played by Al Lewis) and Eddie (played by Butch Patrick) as their son. Unfortunately Marilyn (the less fortunate member of the family) and Spot the family fire breathing dragon pet is not depicted in this kit.

This is one of the "Glow in the Dark" kits, so you really get enough parts to assemble two kits. I used the glow parts for the figures, some of the furniture and details and the spider webs. This lent to an eerie effect that coincided with the horror theme of the kit.

Assembly was pretty straight forward with the detailed and easily read instruction sheet. Most of the parts snapped together with very little glue needed. There were some large gaps and seams that needed attention on the figures. Thankfully the detail on the figures is minimal so you don't lose a lot by applying putty and sanding. I masked the entire facial and hand features to leave the glow in the dark option in place.

Study the assembly sequence and paint the parts as required before gluing them in place. I used rattle can spray paint for most of the larger areas and followed with washes and dry brushing for the highlights. The back/ bottom of the box were VERY helpful in painting. I used it extensively.

Overall, I would rate this as a very FUN build. Something to build without a lot of extra detailing and painting. I strongly would recommend it as a family project, let the kids build it. They would love the glow in the dark parts.

(ed. This kit has been in and out of production for years, and has gone through several ownerships. It appears to be currently available through www.autoworldstore.com which is owned by Round 2).

Thanks to Polar Lights and IPMS/USA for providing this kit for build and Review. HIGHLY recommended to all modelers of all ages (parental supervision would be helpful).

Close-up of room
Previous Next