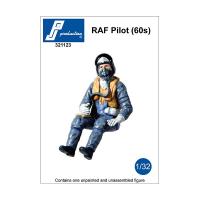 PJ Productions from Belgium is well known for their wonderful resin figures and accessories. This instance is a RAF pilot in flight suit from the 1960’s in 1/32nd scale. The kit includes four resin pieces with the body being one-piece cast and the arms and head separate. Casting is good with a slight amount of flash and is all done in cream colored resin. The box is your instructions as far as color for the pilot and his uniform.

Assembly is first with the casting lines being removed from the arms and these were attached to the body. The head can remain separate for painting if desired. Fit is good, so it can be added later. There were slight seams at the arm and I used glazing putty smoothed with lacquer thinner to eliminate the seams.

Painting the face was accomplished with Scale 75 paints and going back and forth between light and dark. It is a small area with the oxygen mask in front of it. The uniform was based in navy blue with black washes and several highlights being added of navy blue/white mixtures to emphasize the nicely molded in folds. The shirt, gloves, helmet and belt were based in off white with white highlights and light gray washes. The helmet liner was painted dark gray with a yellow life vest. The oxygen mask and hose as well as the visor are black with gray highlights. The entire figure was flat coated, and the visor given a coat of clear.

This is yet another excellent figure from PJ Productions and it would look great in the seat of a Hawker Hunter! My thanks to PJ Productions for the review sample and to IPMS/USA for the opportunity to review it.

Figure Finished Side
Previous Next