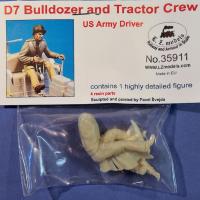 This figure is part of L. Z. Models 1/35 D7 Bulldozer and Tractor Crew series. Other figures in the series include US Army Mechanic tuning engine, and US Army Mechanic cleaning track. L.Z. states that another civilian mechanic and a British driver figure will also be released. These figures are intended for use with the new dozers from L.Z. Models, Trumpeter, Commander Models, and the new series of MiniArt dozers. I recently built PlusModel’s US Grader, but he doesn’t fit without major surgery to his legs (see photo). The driver’s legs are too short for the Grader seat. I fit him into MiniArt’s dozer seat and he fits much better.

The figure comes in four parts - torso, two arms, and head/neck, all with nice crisp detail. The figure appears to be wearing a field jacket with button cuffs and side pockets over a turtleneck sweater. The pants have pockets on the front thighs. The boots look like early service boots with exaggerated toe caps. The M1 helmet has liner straps on the front rim and the chinstrap is a laid over the back rim. The head has a very serious look, very nice crisp detail for the ears, and lots of puffy hair stuffed under the helmet on his forehead and back of the neck. I modified the fit of the figures arms to the torso to fit the steering wheel and control levers on the US Grader. His legs just barely reach the foot pedals, but need to be spread apart.

The resin was cleaned-up in soapy water and sprayed with a white primer. The white primer brought out the outstanding detail in the figure’s face. He has a serious, scowling face that is well proportioned. I used Lifecolor acrylic paints for the face and clothing.

In summary L.Z. Models has produced a very nice figure that fits well with all the dozers now available, but not so much with the grader.

Thanks to Stevens International for supplying the review sample.

Head with base coat

Driver in grader
Previous Next