Kate - I'll Be Right There 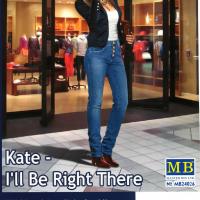 Masterbox Models, out of the the Ukraine, has been a leader in 1/35 figures for a while. They expanded into 1/24 female and fantasy figures in 2016, starting with their first series of six female figures representing the World War II era. This current series, Dangerous Curves, is ideal for modern automotive displays.

The kit comes in a standard end opening box. Pulling out the parts, you will first see that the box is probably three times too large, but in return you get a nice painting on the cover by V. Petelin, and instructions on the back with color callouts in Vallejo, Lifecolor, and Mr Color. I will note that the plastic figure sculpted by A. Gagarin is not identical to the cover paining, but it is close. The hair is slightly different and the blouse neckline is cut differently. Packaging of the thirteen parts are protected within a re-sealable bag.

I would recommend that you wash all the parts to remove any remaining mold release. There are small mold lines present on the parts, but they are easily cleaned up with sandpaper or a #11 scalpel blade. The figure stands about three inches and has several optional bag that fits nicely under her left arm. I used Tamiya Extra Thin cement and found it was just perfect for this kit.

I began by cleaning up the few sprue attachments and the fine mold lines. Test fitting showed that overall part fit was going to be very good. The parts are broken down to enhance painting and minimize seams. I used a bit of putty for her jacket to help with the three joining seams and then again around the seams where the arms glued to the jacket. I glued a toothpick to the inside of the jacket to aid painting. I glued the two legs together but no putty was required for the join. I drilled a small hole to mount a toothpick to make handling for painting easier. I drilled a small hole in the bottom of the neck to mount a toothpick and then proceeded to glue the three parts of her hair on. I test-fitted several times while the glue was setting up. You want to make sure the right arm holding the phone will fit between Kate’s hair and her face. I did the same thing with her left arm to make sure that the purse fit in just right under her left arm. Kate’s front torso was left separate until painting was nearly complete.

After that, it's all painting. One of the fun aspects of this kit is that you can paint her just about any way you wish. I base coated everything but the front torso with Tamiya semi-gloss black (TS-29) and base coated the front torso with Tamiya Fine Surface Primer. I used Vallejo paints throughout and had no issues (other than I need to learn to blend better). I painted the jeans Dark Blue followed by successive lighter blues to add texture and highlights. Her blouse was painted Off-White followed by highlights of White. All exposed skin was base coated with Medium Fleshtone, followed by dry brushing Light Flesh. I highlighted with rosy Flesh and Medium Fleshtone. Her hair was washed with Black Red and then washed with various lighter shades of Brown. The base purse color is Leather with brass highlights for the buckles. Successive brown washes brought a bit more depth.

Final assembly was fairly simple. I glued Kate’s head into the back of the jacket assembly. I then slid the front torso into the jacket assembly until it fit nice and tight against her neck and the jacket itself. The final part was to attach her legs to her torso. Fit was quite good, and if you are careful, she will stand well on her own.

There really isn't any way to screw this one up, and like the other lovely ladies in the series, she really can enhance your auto or truck display. I will continue to ‘fiddle’ with the face as I’m still not happy with the look but overall I’m quite pleased with this kit. Kit design is also very good with the consideration of the separate parts that take into consideration painting requirements. I am looking forward to completing another kit in this series!

My thanks, of course, to Masterbox and Stevens International/MegaHobby for having the nerve to come out with this excellent figure and to IPMS/USA for giving me a chance to assemble and paint it.