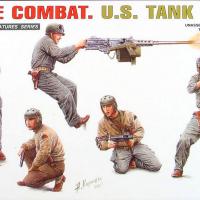 It wasn’t too long ago that there were basically three manufactures of plastic figures available through common sources. Through them, you could usually cobble together a crew for a German tank, but if you wanted some figures for a US armored vehicle, you were stuck with some very static poses that came with the kit. Dragon broke new ground with the release of their US tank crew several years ago, and they were leaps ahead of anything on the market, but still some pretty basic poses.

Now we have MiniArt among a host of new producers that is not only providing some great new figures, but in poses that we couldn’t even dream about! This release of a US Tank crew in “close combat” is no exception, and provides five figures, all in various poses.

Within the box you receive a single sprue of plastic parts and a single sheet that has part number callouts. The sheet is nothing more than a map of the sprue, for the sprue itself does not have the part numbers molded on it. Overall quality is fairly good, with some great attention to detail and uniform variations among the crew figures. Four of the figures are wearing the HBT one-piece coverall, with the last wearing wool trousers. Three of the figures have the popular tankers jacket. Faces are well sculpted, though some may wish to replace the heads with resin. There are some prominent mold seams on the various parts that will need to be cleaned up, but nothing a few swipes with a needle file and sandpaper cannot remedy. Three M3 grease guns are provided, and several carry the M1911 Colt .45 pistol as a sidearm. The weapons supplied are nicely done, though are marred a bit by flash and seams, so some care and light fingers will be needed when preparing these items. No decals are included for the insignia, so you will be on your own for the Armored Division markings and rank insignia.

I decided to assemble two of the figures to check fit and pose. I cut each part from the sprue and cleaned it up using various needle files and sanding films. The plastic MiniArt uses is soft, so use a light touch. Once each part was cleaned, I started by assembling the legs, then added the torso. Arms were next, followed by the head. In each case, there was very little filler needed, and most joints aligned perfectly.

The figure pointing the M3 did require a little modification to the gun in order to make it appear that he was gripping the gun correctly. I ended up cutting away part of the trigger and pistol grip, then just gluing this portion of the gun to the top of the gripping fist. Fitting the gun was done in conjunction with gluing the arms so I could adjust all three items as needed.

The kneeling figure with the pulled .45 posed no issues at all, and went together perfectly.

For both figures, the tanker helmets were fitted last on the head. A little care is needed, as the fit is good but requires tweaking. Start with the top, then rear, then add the two sides. Overall, I think the helmet is a bit on the thick side, and MiniArt may want to think about revamping these parts on future US tanker releases (which I hope are many!). I’ve included photos of the two I assembled, plus the PR shot from Miniart’s website of the complete set.

Overall, I still really like these figures. Not only are we getting some great US armor crews, but in some very unique poses and situations! I envision using these figures in a small diorama with a disabled Sherman as the armored column makes its way through one of the many German towns in which the Allies encountered resistance. Among the set, I believe the kneeling figures and the one servicing the M2 are among my favorite poses. The kneeling figures could also be used in a pre-assault conference vignette.

Again, thanks to MiniArt for breaking the mold a bit and releasing some long needed and anticipated figures! And special thanks go to Model Rectifier Corporation for providing the sample and to IMPS/USA for giving me the opportunity to review these guys!