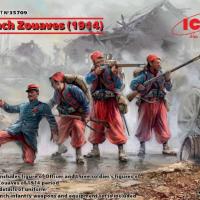 Zouaves were a branch of light infantry serving in the French Army from 1830 to 1962. Their flamboyant costumes were patterned after indigenous Algerian Berber troops, and were so popular that variations on this costume were adopted by countries worldwide, several zouave units serving with distinction in the American Civil War. The French units served in these outfits for a brief time at the beginning of World War One, changing out to a khaki uniform in 1915.

ICM continues with its distinctive line of World War One infantry units with this new package of four zouaves, including three zouaves and an officer. All come in the distinctive Berber-style uniform. The kit also includes the comprehensive French equipment set released some time ago, so you’ll have a LOT of spare parts to play with.

The poses are appropriate for a small vignette, as the officer has fallen (presumed shot). A soldier is assisting him while one fires back at the offender and the other stands guard.

All soldiers wear the full backpack with spare shoes and other accoutrements as well as forage bags specific to each figure. The officer is pretty thinly equipped, as he’s only provided with a sword and a pistol, which he’s gripping in one hand. I trimmed off the sword loop as even at this early stage most officers weren’t wearing ceremonial swords into battle. Overall, not a lot of the included equipment sprue will be required: 3 rifles (with or without bayonet), bayonet sheaths and canteens. One figure’s backpack does not include the usual strapped-on mess plate, and in this case I added the mess pan from the equipment sprue. Looking online, I found a nice shot of a zouave with an absolute mountain of mess gear strapped to his backpack – all of which would be easily reproducible with the material on the equipment sprue.

Assembly is pretty standard stuff, although each soldier has ammunition pouches tailored to that specific figure, as they are often partially hidden by the short vest. The zouave firing the rifle has his arms separated at the elbow in order to permit more adjustment points while installing the gun. Fit was about average, with a few spots needing filler to blend in properly, especially on the officer’s long coat. Conversion potential for the set is quite high, as a simple changeout of equipment could render these as Civil-War era or Franco-Prussian zouaves.

I did just a little detailing to refine these figures – I pyrograved the hair and tassels to give them a bit more texture and drilled out the sleeves where applicable. Rifle slings were made from flattened solder. I replaced the officer’s integral pistol with the identical make from the equipment set, as it was more detailed and also more to scale. Other than these modifications, the figures are essentially straight from the box, although they could certainly benefit with a swap-out of the heads for some Hornet replacements.

Painting, as you might guess, is a bit of a challenge. Interestingly, the braid trim on all of the figures does NOT match the box art – and I believe it is the box art that is at fault. The braid on the soldiers is not particularly easy to do, as the poses give you a number of hard-to-reach spots. Care and patience are necessary, especially if you’re only used to doing soldiers in drab. The one figure that didn’t fit so well into the vignette got a bit of special treatment – I gave him the typical summer pantaloons for something different, although they almost certainly did not wear these into the opening months of World War One.

Although I’m delighted with the choice of subject matter, I must admit I’m a bit disappointed with the actual figures. The initial World War One figure sets released by ICM were sculpted by a true master. They were real gems – as fine and detailed as any resin figures available. They were, in fact, the very best styrene figures on the market anywhere, in my modest opinion. These new figures, although adequate, more resemble something that might be manufactured by Tamiya, and thus represent a lowering of the sculpting standards that first became noticeable with ICM’s Turkish infantry set.

So overall, I’d give these figures an “A” for innovation and usefulness and a “C” for execution. Despite everything, I’ve already purchased two more sets, as I will be sprucing them up with new equipment to represent some units from our own Civil War. Hopefully ICM will continue releasing figure sets from this era – perhaps Belgians or Rumanians or artillery or aviation crew members, all of which would be more than welcome. As always, I look forward to seeing what’s next.

My thanks to ICM for their continued devotion to this fascinating period in history, and to IPMS/USA for a chance to check this kit out.