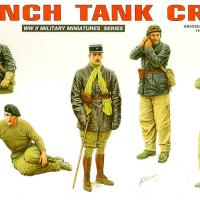 To the best of my knowledge, this is the first set of injection molded French Tank Crewmen ever released!! This kit contains 45 grey styrene parts that will create five crewmen. Four appear to be from the Battle of France, while the fifth looks somewhat like a young General Leclerc, aka General Jacques Philippe Leclerc de Hauteclocque. In truth, he is representative of a standard French Armor Lieutenant. Ukraine’s MiniArt Ltd’s artist, A. Karaschuk, illustrates each figure on top of the side-opening box. They are repeated on the box bottom, where they are keyed for parts placement and colors. Paint numbers are color coded for Vallejo, Testor, Tamiya, Humbrol, Revell and Mr. Color paints. A small black-and-white insert shows the two sprue trees and part numbers. Each figure is nicely molded, with distinct faces and accurate uniforms. They have minimal flash and seam lines that are quickly cleaned up. The fit of the headgear to their heads required minimal putty, as well as a little touch up here and there, which is normal.

There aren’t many injection-molded French soldiers available in 1/35, and even fewer French tank crewmen. Dragon has a set of French tankers surrendering to Germans (1/35 German Armored Infantry France 1940 "Blitzkrieg in France”), but that perpetuates the myth of the Battle of France (begun 10 May 1940 and armistice signed 22 June 1940). According to one of my references, France lost 290,000 men killed or wounded in a brave battle against all odds. If you remember your history, Germany blitzkrieged through Europe even to the surprise of its own generals! The winter of 1939-1940 was a particularly severe one, and it helped postpone the Battle of France with the demoralizing Phoney War (drole de guerre).

The first figure is in a sitting position, legs forward as if he is a tank commander sitting on the open rear turret hatch of a Renault R-35, Hotchkiss H-35 and H-39, Somua 35, Char B-1, etc. With just head and shoulders exposed from the appropriate hatch, he could also be posed as a driver. He wears the standard padded M-35 helmet with separate goggles, gauntlet-style gloves, and leather jacket very much used by armor officers (excellent protection when shaken in tanks !!).* He has a separate scarf that you may or may not use. The illustration shows khaki collar tabs with a grey 28 which would identify his Armor unit. The collar tabs are molded on the figure along with a numeral but my eye couldn’t make out the number. MiniArt shows this figure and the other three tankers wearing khaki leather trousers gathered at the ankles (pantalon cachou) with their distinctive large front pockets. Karaschuk has rightfully illustrated “khaki” varying from France’s grey-green color to the light tan or buff some of us are more familiar with. My print references say the black leather jacket was being replaced by a new brown leather jacket. Armored and motorized troops typically wore leather clothing. This tank commander is armed with a holstered pistol and has a side satchel designed to contain his ANP 1931 model gas mask.

A standing figure is similarly dressed with leather jacket and khaki pants, fastening his standard helmet which has a different style goggles. He too has a holstered pistol.

Another figure is sitting, leaning forward and wearing the tankers’ black beret with a khaki sweater and pants. The fourth crewman is standing, arms crossed, wearing the beret, a double breasted tunic, and khaki pants. The illustration shows the tankers’ insignia on the front of the beret: crossed cannons and a medieval helmet.

The General Leclerc-looking figure stands upright, wearing an old black leather jacket and breeches. He has a wooden cane molded into his right hand (take care as the part is brittle and easily broken). The “cane was quite frequent due to many accidents or wounds received during adventurous careers of officers before WW II (the French Empire was 2nd only to the British one, and some campaigns had been very hard: Morocco, Algeria for example). Leclerc had a permanent cane following a horse accident around 1934.* Leclerc fought in Tchad, Koufra, El Alamein, Tunisia, France, and on to Berchtesgaden, Germany. Our Lieutenant has on long leather laced leggings and an officer’s waist belt with holstered pistol. He wears a long scarf tucked under his belt, which is molded that way. It would be difficult, at best, to remove his scarf. The scarf covers his collar tab unit insignia. He is the only figure in the set wearing a kepi. The illustration has a 47 on it, indicating his unit. I couldn’t confirm an Armor or other combat unit number 47 so, if you can read it on your kepi, I suggest removing it. MiniArt calls out the kepi as black (with a blue top, which I can’t confirm) with two thin white stripes just below the top and one just above the brim. The two stripes indicate he is a Lieutenant. A Captain would have three parallel stripes. A sergeant had one stripe. The rank is repeated on a tab on the jacket front.

If you don’t want to finish these figures as Battle of France era, note that they could have fought on in North Africa in these uniforms, part or whole. Further on into the war, they would wear British or American supplied uniforms. It wouldn’t be unusual to see a tanker wearing American tanker herringbone coveralls with the old French tankers helmet or black beret or other combination. In fact, France sold helmets and uniforms to many other European countries before the war, so you might want to borrow a helmet or beret to top off a Polish, Belgian or Yugoslav, for example. Note that the front of the helmet has a cushion that would jutt out a bit from the wearer’s forehead. A rear ‘brim’ extends out behind him, almost American fireman helmet style.

I can highly recommend these French Tank Crew figures to modelers of every skill level as an excellent value for your money. Not only is the subject matter very welcome, but the quality of sculpting and molding is right there with the best of them. The sculpted figures gave a fair representation of A. Karaschuk’s awesome illustrations. The minimal clean up is common to plastic figures. Ukraine continues to raise the bar high for injection molded plastic figure sets.

As I have no complaints, I’d like to make some suggestions to MiniArt and other companies. It would be great if they’d include a small water slide decal sheet with unit and rank insignias. And either on the box or a paper insert, identify figures if they actually represent a known person, or their rank or unit… and their equipment as well. Someone at the model company has done the research. Why not pass on that information to us?

Finally, how about sets of Allied Tank Ace figures? For example, a set of the top four American Tank Aces (the commanders themselves, not their crews) complete with rank and unit insignia decals and a paper insert that provides a bio of each Ace and illustration of one or more of the tanks they commanded (and decals to build their tanks)! Names like Poole, Leach, Abrams come to mind. How about DeGaulle and Leclerc during the Battle of France, and British Armour aces of NW Europe? Just something to think about!

*Fellow Long Island Scale Modeler member and friend Steve Andreano, introduced me to our friend, General Francis Brossard, Retired. General Brossard’s career in the French Army began in the 1970s. He went to the Saint-Cyr armor school in Samur, served in the Marine Corps, Cavalry and later Infantry. He served 15 years abroad.

I’ve included a couple of quotes from him, and am indebted to him for some of the information included in this review. He added that, in the 1970s vintage French tanks, he “…always wore a scarf, except in summer.” We question whether it would be necessary in May-June 1940. I suspect that MiniArt found photos to base their figures on (ah, if they would show them to us on a paper insert). I also guess that after the severe winter of 1939-40 that the Spring of 1940 may have been unseasonably cold, especially mornings and evenings. The desert is known for its chill when the sun is down. So I wouldn’t hold MiniArt’s feet to the fire on this.

General Brossard questioned whether the trousers were leather, or a “…very, very strong canvas, very robust… in the ‘70s we still used trousers and jackets said to be the same since WWII because they were impossible to get worn! They were nicknamed DLM clothes because of the Division Legere Mecanique created before WWII. The color was light, very light, olive green.”

I submit that information for you to decide how you will equip and paint your figures. I also caution judges not to be adamant about any “facts” and penalize a modeler for believing alternate “facts.” Don’t even think about disqualifying a diorama with the tank crew wearing (or not) scarves in the Battle of France!

Thanks to MRC, who is the U.S. distributor for MiniArt kits, for the review sample, and to IPMS for the opportunity to review it. Thanks to MiniArt for seeing that WWII era non-German tank crews have been long neglected, and for filling the need. MiniArt has been very busy releasing long sought-after figure (and diorama) sets and, as I write, they are about to release a set of injection molded Japanese Tank Crew which will be very welcome. A new set of American tankers in unique poses follows. There is still the need for more British and American crews, and more civilians to bring MiniArt’s many building kits to life. Thank you MiniArt for hearing us and fulfilling our needs!

From a photo of General Leclerc