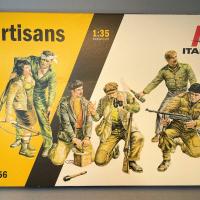 Italeri’s “Partisans” figure kit (photo 1) is a re-issue of the 1977 ESCI kit “Partisans Resistance Group”. The kit includes two sprues providing parts for six figures and various accessories (photos 2 & 3). The illustration on the back of the box serves as both the assembly and painting instructions (photo 4). The suggested paint colors refer to Italeri’s acrylic paint line. Three of the figures are kneeling, one is standing and throwing, and there is a woman helping a wounded comrade. The weapons included in the kit are: three mauser 98k rifles, an MP-40 submachine gun, a sten submachine gun, a carcano rifle, three stick grenades, a pineapple-style grenade, and four Molotov cocktails. The other accessories included are: binoculars, two knapsacks, two satchels, and a plunger-style power supply for blowing up your 1/35th scale bridges.

The molding quality of the parts is good for a late ‘70s vintage kit but details are not as refined as one would expect from a modern figure kit. Parts require clean-up of seam lines and most joints will require either sanding or filler to remove gaps.

Like most vintage figure kits, hands that are meant to be holding things are molded in “C” shapes that don’t realistically grip (photo 5). For these review figures I cut most of the way through their fingers so that I could close them around the object they were supposed to hold and then I filled gaps with epoxy putty.

The kneeling partisan meant to be holding the MP-40 needs surgery to his right arm to get his hands to meet the grips (photo 6).

The figures with visible belts have no detail to represent belt-loops. I simulated belt loops using strips of paper.

Although satchels and packs are provided, there is no detail depicting straps on the figures. I used a thin strip of plastic to simulate a satchel-strap on the figure with the binoculars. Before applying the strip, I filed a shallow groove into the figure to make the satchel appear heavy. Rifle slings and binocular straps are not included, I made these items from strips of paper.

The female figure seems to have some odd proportions. Her shoulders are broader than her hips and her upper back has a lot of thickness to it (photo 7). I carved away quite a bit of plastic from her back and shoulders. The female figure’s shoes look like open-toed platform slip-ons. I think that the extra thickness on the bottoms of her shoes was added to bring her shoes even with the bottom of the wounded man she is supporting. If you mount your figures on uneven ground, this extra thickness would not be hard to hide.

Although these figures may take extra work to bring up to modern standards, I had a lot of fun building and painting them. The variety of poses and civilian clothing makes these figures suitable for many eras or locations. The kneeling figures could be adapted to be changing a tire. If you put bottles in their hands, the woman supporting the man could tell a completely different story.

I would like to thank MRC for generously providing this kit for review.