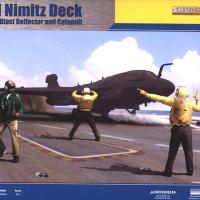 Skunkmodels continues its run of excellent diorama items with a 1/48th scale Nimitz class carrier deck including the blast deflectors. When complete, this will be about 24" x 14" in size. The parts count is large to get an accurate deck with 112 styrene parts and a 5-piece PE set. In addition to this, you can get the PE tie down set which includes over 160 etched tie downs for about $6.00 (and it is worth it). Options include two open or closed hatches, a shuttle for the catapult, and, of course, a positionable blast deflector. Lastly, there are four very nicely molded deck figures.

Construction starts with the deck which consists of 10 large parts. The trick here is to get them as even and smooth as possible. The deck is molded with the correct anti-skid coating, so the better your alignment, the easier the seam fixing to be done. I turned the entire thing upside down on a flat surface and glued parts together with Tenex in pieces, eventually working the subassemblies together. Check often and, while there will still be seams, it won't be too bad. I let this dry thoroughly but, even still, it is a little flexible and I cracked a couple seams during the rest of the process. I re-glued and clamped and that helped firm it up. I filled the seams with Squadron putty and rough-sanded them to replicate the deck roughness. A couple iterations and primer coats and we are good to go. I wanted my blast deflectors even and posed up so I glued those together also. These can be individually posed if the modeler wants that variation.

I added the bays to the bottom of the catapult section but left the working parts out. I added the PE tie downs to the kit. Good news is that there are extras as I tweezer-launched a couple while adding them. I added the PE parts to the catapult area and they fit well. Another coat of primer and we are ready to paint. I closed both of the hatches as I eventually want to add a plane ready to launch and most pics I found had them closed.

I included a couple shots of the USS Carl Vinson so that you can see that the deck is far from black; being exposed to the elements wears it considerably after a half-year cruise in all weather conditions. I started with the light colors and painted the blast deflector hole off-white. Same with the back and sides of the blast deflector itself and all the mechanical parts. These were masked, and then the deck coated with Floquil Black and then covered in batches with Floquil Grimy black, which is a nice dark gray color. Several other grays were scattered about to give that heavily used look. This was then sealed with clear. Skunkmodels provides excellent decals and these were used on the side of the blast deflector, the striping and the surrounds for the hatches. The metal catapult parts were sprayed with a metallic black to give it a different look. I attached the blast deflector, which took some time as there are lots of parts, but, with a little CA and tweezers, I prevailed. The entire kit was flat coated twice and then I used some chalk to dirty things up and flat coated again and we are done.

I built the figures and they are very well done and assemble easily. I am not the greatest small scale figure guy so I gave it my best and they turned out OK if you don't get too close (LOL).

This is an excellent kit and assembles easily. If you are looking for a great starting place for a diorama, look no further than here. Highly recommended. My thanks to Charlette and Silvia and the fine people at Lucky Models for the review sample and IPMS/USA for the opportunity to review it.

Deck crew in scale
Previous Next