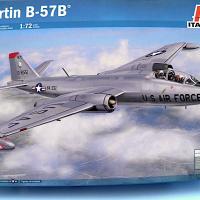 The British developed the Canberra as a replacement for the Mosquito. The plane was so successful that the US purchased the license to build it to fit their needs. After some cockpit modifications along with a few others, the B-57B was born.

I have a personal relationship with this plane in that my Dad worked on the Electronic Countermeasures version at both Westover AFB and Malmstrom AFB so I got to see a lot of these flying around and have loved the plane ever since.

Italeri first released this kit back in 1985 and it is still one of the more accurate versions of the plane available in 72ndscale. While according to some there are some scale issues, it does look every bit like a Canberra when completed. The kit has been released several times over the years by both Italeri and Testors with one modification being the laser nose added to the G version. The clear parts were changed to include the nose sensor and that part is in this latest release, though none of the other related G parts are included.

There are 119 parts included on two grey sprues and one clear sprue. The parts are well molded with fine, raised panel lines and just a touch of flash and seam lines to clean up.

The interior tub builds up quickly with nicely detailed 3 part ejection seats and decals for the instrument panels. If you close the canopy you really don’t need anything else.

The kit recommends 20 grams of weight to be added to the nose to keep her from tail sitting and to be sure I put a bit more in. The fuselage fit fine but I needed a little bit of putty to blend in the wings and stabilizers. I left the landing gear, airbrakes and antennas off until after painting so as not to cause any damage.

The kit comes with numerous weapons options including bombs for the rotating bomb bay, and optional bombs or air to ground rockets for under the wings. You also have the options to pose the canopy open, the landing gear up and/or the flaps down. To lower the flaps, you need to cut them out of the lower wing, but they are easily marked and I had no trouble using an X-Acto to accomplish the task.

The decals give four options and are well printed and in register. The options include three different planes operating out of Laon-Couvron AB in France in the mid 50’s. Two of these birds are in the overall black night intruder scheme and one in natural metal. The fourth option is also in natural metal and represents an aircraft with the Kentucky Air National Guard between 1958 and 1965.

However, I opted to build a Canberra operating with the Pakistani Air Force during the India-Pakistan War of 1971 using decals from DP Casper. I did use the wing walks from the kit and these were a bit fiddley to get in place and didn’t quit meet when done so a little touch up with red paint was needed. Cutting the wing walks into smaller sections made them much easier to apply. All of the decals worked well with the Micro Scale system.

The only real issue I had with the build was trying to get the air brakes attached with their hydraulic piston in place but after a little Anglo-Saxon they finally decided to stay put.

While the kit doesn’t fall together like some of the newer releases and doesn’t have engraved panel lines, it still builds into a nice looking model. I will have to get to the other two I have in the stash.

Thanks to Hobbico and IPMS/USA for the review kit.