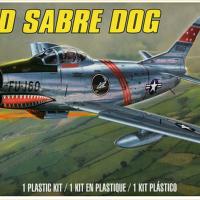 Originally designated as the F-95, the North American F-86D “Sabre Dog” was the initial all-weather and night capable extension of the superb F-86 day fighter. Only 25% common to the day-version F-86’s the “Dog” sported a larger fuselage, engine, and tail surfaces, with a distinctive radome to house an advanced air intercept radar. The D-model also traded its guns for 2.75-inch folding fin aerial rockets, which were mounted in a retractable launcher in the nose of the aircraft. First prototyped in 1949, over 2500 F-86D’s were produced, serving in the air arms of no fewer than 17 nations.

A repop of the Monogram ProModeler tool, Revell’s F-86D is an exceptional quarter inch scale rendition of the 50’s all-weather interceptor. Molded in light gray and clear styrene, the Revell Sabre Dog sports finely and raised and recessed panel detail; amply-detailed cockpit, wheel wells, afterburner can, deployed rocket launcher, and speed brake wells; and an option to pose leading- and trailing-edge flaps in either the deployed or retracted positions. The clear parts are crystal clear, but the review sample canopy had a couple of scuffs which were easily mitigated with a coat of Future floor wax. The well-registered decal sheet provides colorful marking options for 2 aircraft.

Consistent with other ProModeler series kits the build was, thankfully, unremarkable. Fit was generally very good, with only a few touches of putty required on the belly and along the wing roots. A wee bit of trimming of the tips of the horizontal stabilizer locating tabs was required to get them to seat and interlock properly. Overall, though, the kit pretty much fell together.

Instructions were good, with the exception of a couple of parts called for in Step 11 (parts 18 and 74) which had no real home, since the fuselage mounting features in the instructions resembled nothing on the actual model. Also, Step 3 fails to note that nose weights are needed to prevent the jet from becoming a tail-dragger, although a clear post is provided to insert under the aft wing/fuselage joint.

Once assembled, the kit was primed with Alclad II Gloss Black Primer, then overcoated with Alclad II Duraluminum. A host of other Alclad II colors were used to replicate some of the tonal differences in the panels. Lifecolor Khaki Olive Drab was used for the anti-glare panel and Vallejo Surface Primer (Light Ghost Gray) was used for the vertical stab tip. The radome was masked to preserve the gloss black primer’s color and sheen.

With the hot little jet in hand and looking factory-fresh, decal application commenced using the MicroScale system. Decals, as noted, were very colorful and in-register. Although nicely printed and engineered to fit the compound curves well, the red fuselage stripes for the 75th FIS Commander’s ride exhibited some noticeable opacity and color density differences between the edges and the centers. Not noticeable at arm’s length, but something a contest judge having a bad day may hone in on. In this rare instance, the MicroScale system did not adequately get the decals to really hunker down on the painted surfaces. Despite 3 rounds of scoring and puncturing bubbles then flooding with MicroSol, more work still needs to be done. Perhaps Solvaset will do the trick – but not before getting pictures of the finished jet for the review.

Despite the decal issues, the decorated model really looks sharp and was a lot of fun to build. Suitable for advanced beginners through truly advanced modelers, Revell’s F-86D Sabre Dog is a fantastic build, and I HIGHLY RECOMMEND it, with the disclaimer that aftermarket decals would likely be a superior alternative to the kit’s.

Many thanks to Revell for the review sample and to IPMS/USA for the opportunity to provide this review.