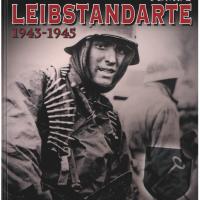 This is a big book! At 591 pages and weighing in at five pounds, in this corner we have volume two of Leibstandarte, the SS Division that was formed from Hitler’s SS body guards. I have not seen the first volume, but the set is a re-release of a previously published book. One of the challenges of this book, is that it comes from a French publishing house, so the text, captions, etc. are all in French. I have a rudimentary reading knowledge of French, so I can get the gist of the text, but probably not full comprehension.

The book is stuffed with photographs of the Division from 1943 through 1945. Many of have been published, others have not. There are also operational maps, side bars on the changing organization of the division, and many photographs of the personalities involved in operations. One note on the photographs, while there are many, the publisher chose, it appears, to put a sepia tone around many of them, obscuring details. Many of the maps seem to be contemporary to the time period as well as maps made for the book. If you are not accustomed to reading these maps, they may or may not be helpful. In the rear of the book is an appendix that highlights contemporary documents and other ephemera.

In a book like this, the author uses the time honored technique of a chronological time line to tell the story of this division. Judging from what I could find, the first volume of the set concentrates on the founding of the SS body guard and its gradual growth as it participated in the campaigns in the west, and the reduction of Yugoslavia. On the eve of Barbarossa, Heinrich Himmler ordered the unit to be expanded into a division. I believe the first edition ends with its participation on the eastern front from the opening of the invasion of the USSR, through the end of 1942 and operations around Kharkov. The second edition begins with operations around Kharkov and continues from that point until the end of the war.

Volume 2 spends a good portion of its narrative on the eastern front, beginning with the campaign around Kharkov that has started in 1942 and continued into the New Year. After a vicious but victorious campaign the division was withdrawn from the front for refitting and reorganization before being tasked for the Kursk offensive in the summer of 1943. During the Kursk offensive, the division, part of the SS Panzer Corps was relatively successful in meeting their objectives, but as we know, the offensive stalled against strong Soviet defenses. Given their experience and élan, they were needed in other locations. When Mussolini’s regime fell apart in 1943 the division was sent south to disarm Italian troops.

The division was then sent to the west and, once again, it fought against the western Allies in response to the Normandy landings and, of course, the Ardennes Offensive, otherwise known as the Battle of the Bulge. As a unit of the SS, units of the division were implicated in the Malmedy Massacre of American troops. As the war began to wind down, the division was sent east again and took part in attacks in Hungry. As the Reich fell apart, parts of the division took part in the battle of Berlin and others surrendered in Vienna.

I have an extensive library, including works in French and German. While my language skills are by no means excellent, I know enough to be dangerous. Even if you can’t extract the information in the book completely, the photographs and graphics of worth the price of the book. .My thanks to IPMS and Heimdal Publishing for giving me the opportunity to review this book.