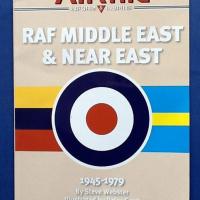 This book is the latest release from AIRfile Publications and covers Royal Air Force operations in the Middle and Near East from right after WW II up to 1979. I had forgotten how involved the British have been in the Middle East in times past. They have had a long history there and played a significant part in the development of several nations. The turmoil and hostility in this region we read about every day is not new. The British have dealt with the violence in this part of the world almost since their arrival.

In the first couple of pages, the authors give a brief history of the area and trace the presence of the RAF from WW II to the late ‘70s. Then the book is divided into four chapters, broken down by the years of British involvement:

The final page in the book depicts the badges of the various stations used by the RAF during this timeframe.

After the war, the RAF maintained a large presence in the area and even became involved in several conflicts. You can read how this influence ebbed away over the years as the different countries won their independence as expelled all foreign military forces. By the mid 1970s, RAF units were almost completely gone from the Middle East and only a small number of bases remained on Malta, Cyprus, and Masirah (an island fifteen miles off the Arabian mainland).

In each of these chapters, the relevant aircraft flown by the RAF during the particular timeframe are shown in beautiful side profiles and 4-view drawings, all done in full color. There are 180 side profiles and five 4-view drawings which cover 43 different aircraft with their different versions as well. There is an amazing variety of aircraft from Spitfires to Lightnings, C-47s to C-130s, Lancaster to Vulcans, and Sycamores to Chinooks.

Evidently, in the early printing of this book, the informational section of Chapter 1 was repeated in Chapter 2 instead of new information. A separate 4-page erratum sheet, inserted into the book, takes care of the problem.

This is another valuable reference for RAF aircraft. As in the other books from AIRfile, this one is also full of interesting camouflage schemes and markings for the modeler. I would recommend this publication for all those interested in British aircraft of this period, as well as those interested in the Middle East.

My thanks to AIRfile Publishing Ltd. for providing this book and to IPMS/USA for the opportunity to review it.