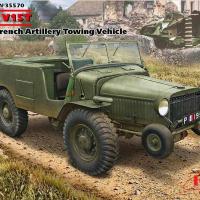 Laffley was a French vehicle manufacturer known for innovative engineering. In 1938 they developed the first prototype for a light military towing vehicle with an advanced transmission and unique suspension system employing “bumper” wheels on both the front and center of the chassis to aid in cross-country travel.  Despite its advanced systems, only about 200 were built before the Fall of France, most of them never being employed in combat.  However, the Wehrmacht was impressed with the design and impounded the majority of them to serve as light utility and radio transport. Only about four vehicles still exist.

ICM has produced a nicely detailed kit of this interesting machine, which features 6 sprues of detailed parts, clear parts, vinyl main wheels (although the bumper wheels are plastic), all creating a highly detailed chassis and engine. A couple of unused parts on the sprues suggests that a German version of this vehicle may be in the offing for the future.

Construction begins with the chassis, which includes all drive shaft and suspension parts, some of which are quite fragile and require care in removing from the sprues.  The rear suspension is particularly fragile, but a helpful template is provided to aid in positioning.  Notably, the portion of the rear chassis which mounts the main towing hook can be removed from the build, but assembled as is, the machine actually features two towing hooks  - not sure of the logic of that, but ...

Overall, the main challenge is the mounting of the various tires, none of which has a really sure lock for positioning.  I spent a good deal of time adjusting all the wheels as the glue dried, making sure that everything was aligned evenly.  Even so, the rear wheels popped off shortly after my first photography session, so I reinforced the axles with superglue, which seemed to do the trick.  Surprisingly, all wheels met the ground evenly, despite my concerns.

The little four-cylinder engine took no less than seventeen instruction steps to complete, and includes everything except the spark plug wires.  To show off this little masterpiece I folded the hood back on one side, which the model allows for, although I was certainly tempted to leave it completely detached.

The Main body is composed of multiple parts, but fits together so well that there are only light seams at the edges to scrape off.  No filling was needed anywhere in the assembly.  There is an optional jump seat included beyond the main four seats.  I did find that scraping the padded seats a bit to show some wear was worthwhile, as ICM tends to depict all padded seats as factory-fresh, which doesn’t always look good.  The driver’s section was extensively detailed, with every lever and foot pedal depicted as separate parts.  Unfortunately (at least in my opinion) none of the cargo section lids were separate, as I would have liked to display some of these open.

Painting is a pretty straight-forward affair, as both offerings are done overall in French Artillery Green.  Looking online, I discovered that there were other paint schemes for the vehicle, if you want to go a little wild.  As for the artillery piece this machine was designed for, Heller back in the 1970s issued both a regular and combo kit which included a 25mm anti-tank gun and crew, and these are the only models of this weapon that I’m aware of.  You can still find some of these on E-Bay or at model shows now and then, but it would be nice if ICM ever decides to release a somewhat more contemporary model of this.

Overall, this is a fun, detailed model of a really unusual vehicle, and I can see a number of interesting diorama possibilities for it.  ICM has once again done a thoroughly detailed miniature of something no other kit manufacturer has even attempted.  Well done!  I highly recommend this kit to any Francophile or other modeler interested in the unique.  My thanks to ICM (hope they’re doing all right) and to IPMS/USA for a chance to add this little gem to my collection.  Happy modeling, everyone, and stay safe.