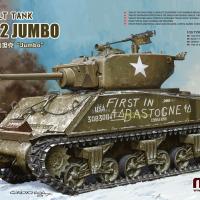 ‘The new German tanks were the headache of ordinary Sherman tanks. The mass production of the M26 Pershing was still some time away. The M4A3E2, a special Sherman variant nicknamed “Jumbo” was thus born. It received much thicker chassis and turret armor on the basis of M4A3. It could withstand the shot of large caliber German tank guns and anti-tank guns. Later, it was refitted the 76mm main gun and had better anti-armor capability. In the end of December 1944, a “Jumbo” tank of the 4th Armored Division under the command of Patton led a unit of U.S. soldiers to break the German Siege of Bastogne and joined forces with the 101st Airborne Division. This operation reversed the situation of the Battle of the Bulge.

The latest MENG Sherman series product, TS-045 U.S. Assault Tank M4A3E2 Jumbo kit completely replicates the special “Jumbo” Sherman exterior details. The entirely different front and side hull armor, and brand-new turret and mantlet profile have been properly represented. It will be the most unique one in your Sherman collection.’

That basic knowledge of this version of the Sherman tank is derived from several primary sources: the Wikipedia web page ( https://en.wikipedia.org/wiki/M4_Sherman_variants ), and the Tanks Cyclopedia site on the M4AE3E2 variant, specifically ( https://tanks-encyclopedia.com/ww2/US/m4a3e2-jumbo-assault-tank ), as well as my personal observations in and around Bastogne during several visits there.

There are literally hundreds of parts included in this kit from Meng, including a small PE tree and some very nice decals including those from the well-known and photographed ‘Cobra King’ tank. There are eleven main sprue trees, two clear trees, five assorted part trees, an optional set of rubber band tracks, eight metal volute springs, decal sheet and a brass PE fret. The instruction booklet is 31 pages, including a type history and the specific history of the key featured ‘Cobra King’ tank. There is an explanation of the various construction icons as they are called out in the step-by-step guide.

The box art is for the Cobra King tank featuring an appropriate snow scene from its use in the crucial battle of the bulge in Bastogne.

As mentioned, the surface details appear to faithfully reproduce the rough surface of the Sherman, including the extra six layers of armor shielding for the frontal and side areas. There are several barrels included (with the longer version called out for the last depicted tank) including both a nice turned aluminum barrel in addition to the plastic ones.

There are 12 stainless volute springs. These are beautifully made of wound stainless steel, which look exactly like the real springs; unfortunately, one primed and painted they are hardly visible—and only known to the builder. On the outside of the volute spring box is another small but nice touch: two very small (but very detailed and printed) boxes—one for a case of Jack Daniels Kentucky bourbon and a case of Chesterfield cigarettes. These replicas may be cut out and added to the details attached to the sides of the finished Jumbo.

I followed the basic step-by-step in the kit instructions thereby eliminating almost all of the pitfalls which accompany most of my modeling projects. Initially you need to decide which variant you intend to model, though these differences appear to be basically related to the decals with the kit (two additional sets of markings for other US Army and one French vehicles). As I have done with other kit manufacturers, this MENG kit follows a usual pattern in its assembly, though the surface finish and amount of kit details are more complete. As you move along, the very heavy surface armor plates are added as one of the distinctive features of the Jumbo Sherman.

One of the optional features provided by Meng is two sets of tracks: one of the standby ‘rubber band’ style, and the far more challenging ejection molding types. Another feature is the inclusion of the ‘duckbill’ extensions for the 156 individual track segments, should you be so inclined. The rubber band tracks do not permit the use of plastic cement, as sometimes possible, but the details appear to be great and their use will save countless hours of very demanding effort, should you choose to use them.

The track assembly is the major hurdle and requires a considerable effort. Each piece requires a great deal of effort from the modeler, which I must admit rewards he or she with the finest individual track detail I’ve seen. The final track sections are constructed using a small jig provided in the kit (though after some initial effort, I wound up using only the bottom portion of the jig).

Adding the duckbills is definitely a chore, though the results are very rewarding. These are officially known as ‘extended end connectors’ though as a ‘duck-bill’ and normally referred to as ‘duckbill EECs’.

From my long-time friend and mentor, Ted Holowchuk, I have adopted this process: using a high-quality lacquer thinner (Ditzler DTL 876), Duracryl Clear Gloss (now marketed by PPG; DCA 468) and finally Testor’s Dullcoat (product # 1160X). After a gloss coat, I then applied a pin wash depicting rust and weathering around all of the raised details. After decaling I dry brushed some smaller details (such as wood handles and metal pieces) were picked out using the appropriate colors. I completed my dry brushings using my old standby Winsor & Newton’s Artist Oil color Naples Yellow Light, No. 426 to provide added surface highlighting.

The kit contains four separate sets of decals, though I have chosen the ‘Cobra King’ decals. Interesting, there are several very good articles reporting the history of this specific Army tank and its restoration (referenced below in the URL references).

This is a beautiful kit in almost every sense of the word. The basic engineering, construction, fit of all parts and surface details are exquisite. As previously noted, I am far from an expert on the Sherman models, but I am impressed with this model of the M4A3E2 Jumbo. I am thankful to both IPMS-USA and MENG Models for the opportunity to review this kit, which I highly recommend.