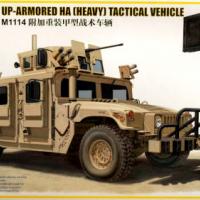 The HMMWV was designed primarily for personnel and light cargo transport behind front lines, not as a front line fighting vehicle. Like the previous Jeep, the basic HMMWV has no armor or protection against nuclear, biological, and chemical threats. Nevertheless, losses were relatively low in conventional operations, such as the Gulf War. Vehicles and crews suffered considerable damage and losses during the Battle of Mogadishu due to the nature of the urban engagement; however, the chassis survivability allowed the majority of those crews to return to safety, though the HMMWV was never designed to offer protection against intense small arms fire, much less machine guns and rocket-propelled grenades. However, with the rise of asymmetric warfare and low intensity conflicts, the HMMWV has been pressed into service in urban combat roles for which it was not originally intended.

During 1995, production of the M1114 based on the improved ECV chassis began. The M1114 meets Army requirements for a scout, military police, and explosive ordnance disposal vehicle with improved ballistic protection levels. The M1114 provides protection against 7.62 mm armor-piercing projectiles, 155 mm artillery air bursts and 12 lb (5.4 kg). anti-tank mine blasts. The U.S. Air Force has a number of vehicles under the designation M1116, specifically designed to meet the requirements of the Air Force. The M1116 features an expanded cargo area, armored housing for the turret gunner, and increased interior heating and air conditioning system. The M1114 and M1116 receive armor at O'Gara-Hess & Eisenhardt Armoring Company of Fairfield, Ohio

I really have to say that this is one of the most complete super-detailed M1114 Humvee kits I have seen out of the box; you don’t need any resin or PE upgrades to complete this build. A nice feature that Bronco has done is making the clear styrene windows the correct scale thickness of armored glass.

As far as I can tell, this kit has more details then the Tamiya kit. The Tamiya kit provides an accurate underside and exterior, but the interior is lacking any equipment details and under the hood is going to need some aftermarket parts. The Tamiya is not bad but this Bronco kit takes it to the next level on details.

The features and options in this kit include:

Bronco provides a nice set of decals. You get a tactical display for the computer monitor, vehicle maintenance stencils, placards and even instrument faces for the instrument panel. The instructions provide a color profile for a generic vehicle in desert sand and paint instructions for Tamiya, Humbrol and GSI paints. Bronco did not provide any placement instructions for the particular vehicles portrayed on the decal sheet, but from what I can see you get markings for:

For this build, most of the painting was done as I progressed though the building process. The base paint colors were applied to the parts on the tree in advance, and then they were assembled. Touch ups were done where needed. The armor glass was coated with Alcad armor glass finish. A light gloss coat was applied, then a light wash of artist oils: raw umber first, then Naples yellow hue.

I definitely recommended this kit for medium to advanced skilled modelers. This kit has a TON of details and will require some time and patience to complete. But it’s well worth it; you get one of the best detailed kits in its class for this version of the M1114.

Hats off to Bronco for providing a complete, detailed kit. It simply has everything you need for a perfect OOB build.
I would like to thank Bronco Models and IPMS/USA for the opportunity to conduct this review.