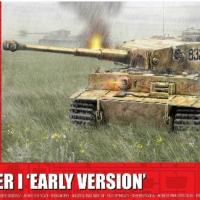 Airfix doesn’t have much of a history creating 1/35th scale armored vehicles (in fact, none) so I was a bit surprised to see them leaping into this particular market with a series of famous tanks all in one fell blow. Turns out that Airfix is doing what so many other manufacturers are doing – reboxing other manufacturer’s models under their brand name.

In this case, it’s a reboxing of Academy’s Early Tiger 1 model with interior. I can think of a few reasons why this would be a good idea, although this one leaves me a bit nonplussed. The Academy kit is still quite available on the internet and the prices are comparable, so I can only assume that Academy kits are hard to come by in Great Britain.

On to the kit itself. Having recently completed the incredibly detailed but immensely frustrating Meng Tiger II with complete interior, it was interesting to compare the two builds. There’s no argument that the Academy kit is older and showing its age a bit with soft detail and a fair amount of flash. It is also not completely accurate in a number of details, including the shell storage and engine exhaust piping, but is certainly a far more forgiving build and a relatively relaxing experience overall.

Airfix doesn’t change a thing on this model, as far as I could tell - even using the Academy instructions for the most part, which are printed in three separate printings for no particular reason, which means you have to fish around in the box whenever one set of instructions simply stops. Odd. In addition, the instructions are more than a bit vague on occasion, requiring a certain amount of puzzling out of details or locations.

Unlike the Meng kit, the Airfix kit doesn’t waste a lot of time on bits that won’t be visible on the final model. Whereas I wound up cleaning, painting and decaling some 70 artillery shells for the Meng model, this one only offers the top layer of shells in each bin. Even so, these aren’t visible once the upper hull piece is put into position unless, like me, you create an ACTUAL cutaway model to show this detail.

The same thing goes with the turret interior, although they include one glaring error that is far too visible – for some ungodly reason they left the gun tube in front of the breach wide open. Why Academy chose to do this is beyond me – it would have just as easy to mold the tube solid. As I said earlier, Airfix clearly chose not to fix any errors in this kit, and this has to be the most bizarre of the lot. Unfortunately, I didn’t notice this until too late in my built and resorted to “fixing” mine by slapping some plastic strip on each side just to disguise it, but it really needs to be filled in. You have been warned.

Still, when all is said and done the interior looks quite acceptable. I cut out some floor panels to show off the torsion bars, but such surgery really isn’t necessary.

The exterior has all the appropriate bells and whistles, although the spare tracks for the turret have only the upper holders and lack the lower. I left these off. A very nice set of photoetch screens is provided for the engine deck, but since I was cutting this area open, I thought I’d reserve these for another build. Tools and other bits and pieces are acceptable, but nothing to brag about. In another incarnation I probably would replace these with the spare equipment bits in the Tamiya tank accessories kit. The kit offers early and late exhaust filters but the “tubing” (molded in black for no particular reason) is a relatively poor fit and requires some filling to look correct. The front plate that sits over the driver’s area is also a very tight fit, and shaving a bit off the transmission is a pretty good idea if you don’t make it a cutaway panel like I did.

No attempt has been made to replicate the rolled-steel look of the surfaces, and if I were to do this one again I’d probably do the “skip the Dremel bit over the surface” technique to add some character to the flat surfaces. The smoke dischargers on the corners of the upper hull are also molded pretty poorly and I’d replace them with some brass tubing as well.

So, what do you get for your time and money? Actually, you get a perfectly acceptable reproduction of an early Tiger 1 with a suitably busy interior - nothing fancy and certainly not stellar but fun to build nonetheless. In today’s age of “super” kits that are agonizingly detailed down to the last rivet, this model harkened me back to my early days of modeling, when I typically sat down to build something to relax, not have my mojo challenged. All things considered, that isn’t so bad.

My thanks to Hornby and IPMS/USA for a chance to play with this kit, and to Airfix for taking a shot at this particular sub-genre of the hobby. Hats off to both!