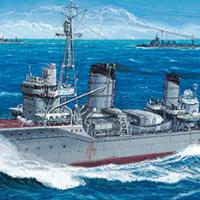 Thanks ahead of time to Tamiya USA for providing IPMS USA this review kit, and thanks also to the reviewer corps leadership for sending it to me to build and review!

This kit was originally released by Tamiya back in 2006 as the “Yukikaze”, which was the only survivor of the Japanese Kagero-class “A” of Destroyers in World war II. This new release of the kit is the lead ship Kagero itself. Kagero definied in English translates to “Mirage” or “Heat haze”. The net has a lot on it; I just found it interesting to read the history.

Tamiya has, to my mind, an excellent sales process. The kit box captures your attention; a professionally-painted rendering of the actual ship in action, side-view diagrams of the craft, pictures of the assembled model with or without full hull, photographs of the metal parts, and a feeling that “you really want to buy this model” ensues. It works…

From the beginning, this is a simple, well-designed kit. You begin with the determination of waterline or full-hull options; the lower hull is molded in red, and rest of the ship is in gray; very close to the Kure- Arsenal gray required to finish the model. Clear plastic windscreen is provided for the command deck, and a black plastic stand is provided, with aluminum-finish self-adhesive placards for a name plate. Metal shafts are included for the two drive screws, a length of anchor chain and photoetch rounds out the additional parts. Full, “In-Color” Painting diagrams and marking guides are included, (a Tamiya specialty), and description of what decals must be used for which period. In the case of my build, it was post Pearl-Harbor, so most of the ship script was not used on the build.

I noted this kit was definitely designed for multiple ships in the class, as many flashed-over holes are provided in the underside side of the deck to facilitate installation of extra armament and deck details for other ships in this class. Remember to open the required holes in the forward deck for the minesweeper booms at this juncture; otherwise you’ll be doing a lot of “TLAR” (That Looks About Right) drilling of holes on the deck after it is installed.

The hull was an easy start; drill holes for the stand, install nuts and caps for the attaching screws, then cement three bulkheads in place. Add three decks and a forward bulkhead, and the hull is complete. I painted the lower red hull with Tamiya dull red spray, masked, then painted the linoleum deck sections with the recommended Tamiya Linoleum brown. Masking this area next allowed me to then spray Tamiya’s Kure Arsenal gray on the rest of the hull and deck. After removing the making tapes, I decided to attach the stand at this point, as I have learned a ships’ rounded underbelly is not conducive to working on the upper portion of the model, particularly if rigging is involved. I could make a soft box with foam, but as I only do a ship or two every couple of years, this would suffice.

The remainder of the build is relatively simple. The three main turrets have option of raised or transit (Lowered muzzle) cannons; this is also true on the 12CM anti-aircraft cannon turrets. The remainder of the kit was a “Follow the instructions” exercise.

One very notable engineering detail: The masts and for/aft ensign stanchions are all “ABS” verses “PS” (Polystyrene) like the majority of the kit. This makes them more durable, and the scale thickness is excellent. That, and I had not one molding seam to clean up on these parts! A jig is included for assembling both tripod main masts, do NOT glue these to the mast parts or you will be having a short set of masts when it comes time for installation.

The photoetch was very well done on this kit… although most of it falls into the “Micro” category it all works well I liked the ladders; they folded nicely and there were indentations in the deck to insure they has something to flood with superglue and provide a “More than butt joint” installation. The most challenging parts for me were the small braces on the forward tower, ( what must have been 1/1000-inch tabs to go into indentations… the superglue kept wicking behind the tweezers,) the loop on the anometer (sucker was less that a pencil lead in diamter), and the depth charge racks. I lost two of the depth charges (…“Pling, click” and silence… somewhere in the dust on the garage amongst the dead bugs and spiders) and had to pull some sprue to make new ones. Good reason to wear eye protection.

Decals worked well; I only included the waterline depth markings, as I could not determine if the actual ship name was included on the fantail; it was not visible on my limited research.

Final analysis: another fine product from Tamiya. This was about a 12 hour project, without rigging or guard rails (which are not included). A good starter for 1/350 naval products if you have not built one before. Thanks again to Tamiya and IPMS USA for the chance to enjoy a quiet ship build!