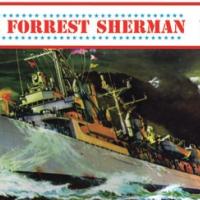 The USS Forrest Sherman was the lead ship in the US Navy Destroyer program instituted in 1953. Constructed at the Bath Iron Works in Bath, Maine beginning in October 1953,  launched on February 5, 1955 and commissioned November 9, 1955. After a long and distinguished career, she was decommissioned on November 5, 1982, and stricken from Naval logs on July 27, 1990. An effort to maintain the ship as a Museum ship failed with a few artifacts having been saved for exhibit.

With a full displacement 0f 4619 tons and  a crew compliment of 324 she sported an armament of 3 5’/54” main guns, 4 3’/50 guns in two twin mounts fore and aft, 2 Hedgehog mortar mounts, depth charges and 4 6x12.74 Mk 32 torpedoes. Having twin screws, she could move right along at 33 knots and had a range of 4500 nautical miles at 20 knots. Recently released by Atlantis models this is the old Revell kit originally issued in 1958, shortly after the commissioning of the actual Forrest Sherman!! Her design was the last of the Gun destroyers with subsequent designs integrating rockets and missiles alongside the guns.

When I was a boy and building models, this kit played a large part in stocking my ‘shelf navy’ in an early attempt at world domination by a young, impressionable (and mostly irresponsible!!)  kid!! I had built it about 4 times, in all the changes in packaging it underwent over the years. When I saw Atlantis had rereleased this gem from so long ago my interest was piqued and I had to request this sample. Here was a chance to build a kit from my youth with the techniques and tools of today!! I jumped at the chance!!

When I received the kit in the mail, I eagerly opened the box to feast my eyes on this relic from days gone by. I quickly found this was going to be a good news/bad news kind of build. The good news was Atlantis faithfully reproduced this old kit in even the smallest detail. The bad news is Atlantis faithfully reproduced this old kit in  even the smallest detail!! As a modern-day scale modeler whose history stretches back to the early days of plastic modeling, I’ve become used to shake and bake kits that are the very picture of the prototype when completed. This issue faithfully reproduces all the ejector pin marks, flash, deficient molding, and other issues we fought though back in the days we refer to as the “golden age” of our hobby. This build was going to be nostalgic, but only up to a point!!

One of the reasons todays kits have so many tiny parts is that many details are separate pieces we must attach at the correct time in the build. This kit has many of those same details we look for today, but they used to be molded into the bulkheads, decks, or other locations where they’re found. All the bollards, fire fighting gear, hatches and other fittings are molded into the decks and bulkheads. There are a few blobs that are undecipherable in terms of what they actually represent, but I chalked those off to the era this kit was first manufactured.   My sample contained 69 parts, molded in light grey plastic exactly as the original kits were. The eight-step instruction sheet calls for 68 pieces to be used in the build. My sample had a mysterious 69th part that isn’t used on a destroyer of this type. I’m still trying to figure out what it is, and where it belongs!! If anyone has an Atlantis kit and is missing a part, let me know, I may know where it is!!!

I built the kit as called for in the instructions, only making minor adjustments for my painting sequences. As this kit was being built for review, I didn’t make many changes or modifications to her. I wound up doing three of any consequence: I closed off the rear of the two torpedo houses, covered the two lifeboats with tarps and ribs, and added the rigging. I made the torpedo house backs from .10 sheet plastic. Toilet tissue and wire were used to cover the lifeboats. The rigging is .02 and .03 lead wire. More on this later.

The build itself was pretty straightforward. As I mentioned earlier, there were a number of ejector pin marks. I counted 26 in the main deck alone. I removed some of the more prominent ones, trying to get the surface flat to match the surrounding decking. I didn’t fill the ones that sat below the surface. Doing all that would have added quite a bit of time to the build. I used super glue to fill voids where the plastic didn’t fill the mold. A few modern shortcuts were inevitable!!

I had a problem fitting the main deck to the hull. An extra set of hands would have been helpful here!! Part #13, the rear Bulkhead had to have both of the lower tabs removed to get the part to fit correctly. It was also tricky to get the bridge level to attach to the main house level. On the fantail there is an auxiliary depth charge rack that is so mis-molded I almost threw it out. It was completely unrecognizable as a useful part. I cleaned all the flash off the best I could and mounted it on the aft deck where it belonged.  All these deficiencies are a direct result in the era this kit came from. Atlantis is to be commended for rereleasing this kit and keeping it true to its original form!! That fact caused a few bouts of heartburn but when taken in context and after the fact it wasn’t all that bad!!

When it came time to paint and finish the kit, I used Scale Color paints Modern US Navy colors. These paints are great to work with and clean up with water!! I used their Hull Red on the lower section of the hull including the shafts the A arm shaft supports. The upper sections were painted Modern Haze Grey FS 36270 and Modern Deck Grey FS 36008 used for the decks. I used black decal stripes for the boot between the hull red and the haze grey. This made for an easy way to apply the stripe without more complex masking. I wound up hand brushing the deck grey to eliminate more masking. It seemed an easier task to hand paint it rather than masking, although it took three coats to get the coverage I was looking for. I painted the tops of the stacks and the mast areas on a line equal to the tops of the stacks as shown in photographs Flat Black.

I decided early in the build I would add some rigging which included the flag lines and antenna that ran between the two masts. While researching the ship I found information that indicated for ID purposes she carried the flag hoist of NFPS which I replicated in signal flags from another source on the port side, as no flags of any kind were included with the kit. I also added an American flag to the upper most halyard also as shown in photos. I wanted to add some flag detail on the starboard side for symmetry, so I added a Senior Office Present pennant on top, then put my initials KDH below it for a personalized touch!! Another piece of interesting info I picked up in my research was her radio call sign was Riot Squad!! That’s nothing to add to the model, I just thought it was interesting!!  I mounted the included base to a piece of clear pine scrap I had in the shop finished with stain and three coats of sanding sealer, then epoxied the ship to the base to call it done.

I enjoyed this trip in the “way back machine” to a time when our hobby was in a different place. Before PE, resin, and super detailed kits, more or less a simpler time. It brought me back to a time in my life when the most difficult decision I had to make was which kit my allowance would get me this week!! It also gave me a sigh of relief when I finished it and that the completed look was by far the best-looking example of this kit I ever built!! Everything was painted correctly; all the parts were assembled as they were meant to. And the flags were correct!! There’s a time and place for these nostalgia type kits. For me the time and place lined up perfectly to rebuild this old friend one more time. I’m very appreciative to have had the opportunity to revisit a kit I fondly remembered but had little chance of rebuilding before Atlantis rereleased this kit, and others they’ve recently added to their catalog. I recommend this kit to all of us of a certain age, anyone interested in this class destroyer, or to anyone wanting to experience building a great old kit!!

My thanks to Atlantis Models and IPMS/USA for supplying this great kit sample for review.