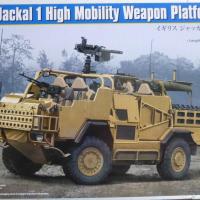 The Jackal 1 is a new kit from the prolific model company, Hobby Boss in 1/35 scale. It is a unique vehicle from the United Kingdom and deployed to Afghanistan. For those of you unfamiliar with the vehicle, here’s a short description from Hobby Boss, “The British Army has added a category of vehicle to the armored vehicle fleet called the tactical support vehicle (TSV). 400 TSVs were ordered in October 2008 as part of the $700m protected patrol vehicles package. The new TSVs will be used to accompany patrols, and to transport supplies such as ammunition and water. The three types of the vehicle include the Wolfhound – a heavy armored support vehicle to support and supply the new Mastiff with heavy mine protection (force protection), the Husky – a medium armored truck to carry out support in less threatened areas (Navistar Defense and Dytecna Ltd), and the Coyote – a light armored support vehicle to support the new Jackal 2.”  Molded in the traditional tan colored plastic, the kit has 12 sprues, several frets of photoetch, a separately packaged hull, a sprue of transparent parts, and a small sheet of decals. The kit includes modest markings for two vehicles. The parts are well molded and do not have much in the way of flash since this is a new kit.

The first steps of assembly begin with the chassis. The undercarriage is fairly straight forward. The smaller parts are a bit fiddly, but once the parts are put together it remained square and strong. The instructions call for parts B8 being installed without cement. This allows for the wheels to turn. I chose to glue those in place. After the suspension is assembled comes the first challenge of the kit. The fenders are a combination of plastic and photoetched parts. I was frustrated by a gap between the body of the vehicle and plastic/photoetch combination. After looking at photographs of the Jackal online and looking at the color insert for the model, it appears that there is supposed to be a gap between the body and the fender. The gap should be even, front to back. This is not clear in the instructions. The other challenge are brackets that are attached from the rear fender to the body of the vehicle. They are very difficult to assemble. I am not sure if it is operator error or a poorly designed part, perhaps a bit of both, but I found that particular step very trying. The last step is assembling the wheels. The wheels themselves go together easily, but the connecting points of the wheels to the chassis is a bit tricky. It took a great deal of fussing around to make certain that the wheels were firmly attached to the suspension arms. Hobby Boss kits use flexible plastic tires. I like the look of the tires, but they tend to fit loosely on the hubs.

Once the chassis is assembled, it is time to turn the model over and begin assembling the body. It goes together in smaller components. The largest piece is the front end which includes the dash, and the bumper. This is then attached to the front of the vehicle. I had a great deal of difficulty attaching the front end to the vehicle chassis. I am not sure if it was operator error or a design glitch. After some sanding and fiddling, I was met with success. It was probably the frustrating part of the kit. Speaking of the front end, there are smoke dischargers that are mounted on the front left and right corner of the vehicle. I have scoured the instructions several times to understand how they are mounted and assembled, but that step is missing. That appears to be an error on behalf of Hobby Boss.

Once the front end is assembled, the next steps, through the end of the kit, involve the construction of the interior. The various bits and pieces in the crew compartment and in the back go together relatively easily. The one issue I had were the racks for the Jerry cans that go over the left and right rear fenders. The racks have pieces of photo etch that subdivide the racks. What I found was that the pieces of plastic that made up the racks are relatively flimsy and easily distorted. You can see that in the finished model. The final step was assembling the weapons stations. Given how fiddly that they could be, I was pleasantly surprised how well the gunner’s station in the crew compartment and the machine gun position in the driver’s position just popped in. I was gratified that it was not a chore. If I remember correctly, this particular part in the Airfix kit was a bit fiddly.

The decals provide markings for two vehicles as well as a small selection of dials for the dashboard. As with most Hobby Boss kits, it includes a separate color sheet. Several years ago I put together the Airfix 1/48 version of the Jackal. I liked the look of Humbrol 237, Desert Tan. I like the look of the color and used that to paint the vehicle. After painting it, I gave it a coat of Future, applied the decals and gave it a flat coat. The decals are super thin, which is typical of Hobby Boss kits, so care must be taken as not to damage them. Those of you have put together Hobby Boss/Trumpeter kits, the only color call outs are in the full color supplement that is included with the instructions. These are very helpful, but I would prefer that they were called out in the instructions.

As mentioned already, Airfix released this vehicle in 1/48 scale several years ago, so to see Hobby Boss releasing this kit in 1/35 scale is a welcome addition to their extensive line of kits. As mentioned in the body of the review, while I enjoyed this kit, Hobby Boss made some engineering choices and fit issues that make this kit, at times, challenging. While I found a solution, this kit may not be appropriate for beginners. This is not a shake and bake kit. I appreciate the level of detail that Hobby Boss put into this kit. Given some of the very small pieces, though (I am thinking of the hinges that the front doors are mounted on), I often think that just because you can manufacture small parts, does that mean you should?

Bottom line, even though there are some challenges, I highly recommend this kit. My thanks to IPMS and the Model Rectifier Corporation for giving me the opportunity to review this kit.