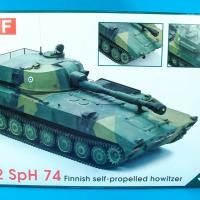 The 122 SpH 74 is a tracked, medium sized self-propelled gun in service with the modern Finnish army. A Soviet design, the SpH 74 is the Finnish designation for essentially the 2S1 Gvozdika that has been around since the early 70’s.

Skif’s new release is a reissue of their earlier 2S1 with the inclusion of new parts to allow the modeler to build the version currently in operation by Finland. As far as I can tell the new parts are mainly in photo etch, with the original plastic parts unchanged. In fact more than a few parts will go unused as they are 2S1 specific and not present in photos of the 74 I’ve been able to dig up.

Allowing the modeler to see into the future, the box top features a nicely built model of the contents inside. Great box art may sell more kits, but it is nice to see a manufacturer using the built up model for all to see. Certainly it will sway some, who are unfamiliar with this Ukrainian model company, to purchase the kit.

Packed inside the somewhat flimsy, top opening box are (5) part trees, (2) vinyl track trees, (1) photo etch sheet. A small decal sheet with markings for a single AFV, and a multi lingual instruction sheet finish out the contents of the kit. Paint call outs for the build are presented in Humbrol colors with their FS equivalents listed.

The” Army Men” green colored plastic parts are a little soft, but will look fine under paint. Some flash was present but nothing that would be a big deal to clean up; cylindrical parts are well made and are not miss-matched or oval in shape. Like many AFV kits from Eastern Europe the lower hull is built up with a floor, sides, and front and back plates. Test fitting and initial gluing found the parts to fit well with no obvious alignment problems. Gluing with Tamiya Extra Thin Cement, I found the plastic to have a delayed reaction to the solvent. It seemed the glue took a few seconds to dissolve the outer glossy outer layer of Styrene. Sanding the mating surfaces may improve the adhesion time.

The photo etch fret is the star of the show and is well made. The etched brass sheet features bend lines that will make folding the part much easier when using an Etch-Mate or likewise bending tool. Grab handles, mud flaps, and various other parts make up the sheet. The rear basket attached to the turret is also featured on this sheet.

Vinyl tracks can be troublesome, but I found the ones included to be very pliable and sharp in detail. If there was one reason to replace them it would be because of the attachment method. The tracks cannot be joined with cement, they must be melted together. MiniArm does produce resin replacement tracks if you are so inclined. On the subject of replacement, I have found one other area of concern with the road wheels. The wheel and tire are well made except the rim is not present. There is no edge to paint, or mask to. Again MiniArm will come to your recue with their replacement road wheel set.

Overall I see this kit as exceptional value when you consider the inclusion of photo etched parts. Hopefully the proof will be in the build, and I will continue the story next time with the full build review. My thanks to Skif for the review sample, keep the modern stuff coming!