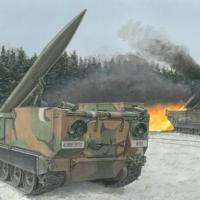 This M752 is understandably 100% newly tooled. Furthermore, it’s the only 1/35th scale full plastic kit of this US-manufactured tracked missile launcher currently available on the market.

The missile can be elevated up or down to represent firing or transport modes, respectively. The missile mount and associated elevation mechanism are sophisticated and strong enough to support an accurately detailed Lance missile.

This new kit captures the somber days of the Cold War, and so this Lance self-propelled missile launcher would make a fine addition to any modern warfare kit collection. The Lance system was used by the US Army, Belgium, Germany, Israel, Italy, the Netherlands, and UK, meaning that this new kit offers enterprising modelers a lot of versatility.

The only other models of this vehicle, know to this author, is a 1/87th scale Roco Minitank kit and a Hobby Fan kit in 1/32nd scale. The Hobby Fan kit is mostly resin with some styrene parts for the road wheels and such. When Roco Minitank released their model they also released the accompanying transporter/loader M667. The Hobby Fan kit could be built as either the M752 or M667. Dragon Models engineering of some of the vehicle parts suggests other variants of the M113 chassis. One can hope that Dragon Models USA will be forthcoming with a M667 in the not too distant future.

While we wait, Dragon Models does provide us with the under represented M752. The M752 was based on the M113 chassis. The U.S. Army fielded the Lance missile in the early 1970's. The Lance was a tactical missile system for theater use and was nuclear capable. This missile system was replaced by the Pershing series and later by the M270 Multiple Launch Missile System.

The Dragon Models kit consists of 342 parts on eight sprues with a small sprue of clear parts for the driver compartment windows. There is a small fret of photo etch for the missile tie down straps and some detail bits for the front and rear plates on the M752.

The tracks are of the length and link variety and have individual rubber track pads (soft black vinyl) for each of the 74 links. Don't freak out! It a tedious chore, not an arduous one. If you so choose, you won't need to apply all of those track pads as a fair number will be hidden behind the sand shields (part # D1/2) mounted on each side of the vehicle. The Israeli's fielded this system and based on an extensive (almost thirty minute) search of the internet they are the only one to delete those sand shields. So if an Israeli vehicle is the way you go, happy track padding! But to Dragon Models credit, the effect is pretty neat! And saves a painting step.

Assemble begins with the running gear which consists of five road wheels, one idler, and one drive sprocket per side. Do exercise some caution when applying the transmission covers (part# D13/14) to the drive sprockets. There is supposed to be a gap between the transmission cover and the lower hull that allows the front glacis plate to slide into.

It should be noted that this is a Dragon Models kit. Consequently, the assembly instructions are not the most scrupulously proof read or most well thought out. You could reason that they are the product of a committee. (Not to disparage committees.) Their assembly instructions often require some adult supervision, even for the most experienced builder. Go slow, pay attention, test fit often, and all will be right with your build.

The majority of the build, six of the eighteen assembly steps, is consumed with the vehicle mounted missile launcher. The launcher has some marvelous detail and is a kit unto itself. An expression that actually applies in this case. The launcher may be built in launch or transport mode. Dragon Models also provides a piece of mono filament line to replicate the telemetry/firing cable employed on the launcher. I substituted a length of HO scale braided cable to represent that line on my build. The launcher, with most of the kit parts, is a great feature of this model. Fun Fact: on the real M752, this launcher was removable and could be towed or deployed as a stand alone launch platform, with wheels and everything.

After dealing with the launcher you get to move on the the various hull pieces. The engine cover /top (part# B13) presented a few initial problems. The cradle (part # I6) for the nose cone of the missile is mounted on this piece. There are three photo etch parts that represent the tie down brackets/straps (part # A7) for the missile. The parts labeled as A 7, are actually I 7. Shocking! It wouldn't really be a Dragon Models kit if there wasn't at least one mislabeled part. More whimsy on their part? The location of the tie down cradle on the engine cover top is a bit vague, so consult your sources. Or do what I did, position the launcher assembly first and locate the cradle accordingly.

There is nice detail on the front of the vehicle with all the various headlamps, black light, and siren molded as separate parts. One slight fault that might be levied against Dragon Models is that the headlamps lenses are molded in gray styrene, not clear.

A curious omission involves the photo etch engine exhaust shroud. The shroud is lovely but Dragon Models does not provide you with an exhaust pipe. The actual exhaust pipe was pretty basic so fashioning one from your spare parts stash shouldn't present too many problems.

If you wish to display the M752 in launch mode the drivers compartment sides and roof can be shown in a stowed/launch position. Dragon Models provides the two seats, front instrument console, and the control levers for the drivers compartment. The drivers station was rather spartan affair on the real vehicle so you'll really just need to add the odd extra bit here and there to finish it off properly. There is a nice photo of this compartment provided via walk-around photos of a M752 in German service.

The Lance missile is molded in twelve parts, four of which are the guidance fins. If you plan to show your M752 in transport mode, those fins would not be fitted to the missile body. They were attached just prior to launch. The guidance fins were fitted into slots on the missile body. This missing detail was simulated by placing styrene strips from Evergreen along the sides of each fin. Dragon does provide the carrying/transport cases for the missile fins carried on the real vehicle, although they are labeled as tool boxes on the box top.

A nice feature are individual parts (part # I86) that represent the stabilization rocket outlets on the mid section of the missile. If you have trouble finding those parts, look on the back of the I sprue, behind the sprue label. On the runner is where they lie. In Dragon's defense, this may have just been a little Easter egg hurt to lighten the mood.

There is an aspect of Dragon Models kits that doesn't act as a a mood enhancer. More like buzz kill. Parts that are not mentioned anywhere by anyone: such as parts B 2 and B 4. These appear to be rear view mirrors. You will need to consult your references as to their exact location on the vehicle. I just positioned mine where it seemed logical for them to be.

See the bottom of this review for a short video of a Lance missile launch. Replicating a launch would make for a nifty and, potentially, an award winning diorama.

Painting and markings options, listed in the instructions, are for three unidentified units. In addition, Dragon gives you four complete sets of letters and numerals for any unit you might choose. They also have included most, if not all, of the stenciling that was on an operational Lance missile. Extra brownie points to Dragon for that. One cavort, on my example, was the absence of one set of lift strap location markings (decal # 11) on the decal sheet.

As the M752 was operational primarily in Western Europe, you are almost required to apply the tri-colour NATO paint scheme that was used during the 1970's. But this vehicle was also deployed by Netherlands so unbroken NATO green would work. And if you choose to do an Israeli vehicle...well you know... a desert-y© color.

Aside the odd vagary, this kit goes together well and I enjoyed building it. When finished and all gussied up with decals the Dragon Models M752 will make a worthy addition to your cold war armor collection. My thanks to Dragon Models USA for the review copy.