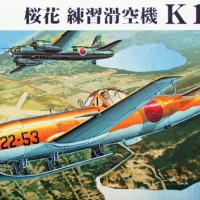 Based on a design by Ensign Mitsuo Ohta with the assistance of students of the Aeronautical Research Institute at the University of Tokyo, the Yokosuka MXY-7 Ohka (Cherry blossom) was first conceived. Over 850 of these rocket-powered, anti-shipping, kamikaze planes that were dropped by Mitsubishi G4M “Betty” bombers were constructed during 1944 and 45. The idea was to glide in on the attack, and then the pilot would ignite three rocket engines on the final approach, delivering a 1200 kg (2646 pound) payload to the target. The aircraft had a limited range (twenty-three miles), and with delivery being via a heavily laden bomber, there are no recorded successful attacks by the Ohka during World War II (although there was a near miss with the battleship USS West Virginia on 1 April 1945). The basis for this particular kit, though, is the unpowered K1 variant that was filled with water in place of the explosives and engines in order to train the pilots for their mission. Forty-five of the K1’s were built during the war by Dai-Ichi Kaigun Koku Gijitsusho.

Although I have a few FineMolds kits in my to-build stash of kits, this is the first one that I have actually constructed. The company uses a soft, light grey plastic for their kits, and there was no flash on any of the parts (as one would expect for a new release). This model consists of forty-nine parts on two grey sprues and one clear sprue, and a decal sheet with markings for three different aircraft. The eight pages of directions are contained on a single sheet of folded paper which contains some English within the individual steps, but the majority, including two pages of history, is only in Japanese. Construction is straightforward and, as with most aircraft kits, begins with the cockpit. Both Gunze and Tamiya paints are spelled out on the markings page, along with an English translation of the colors.

With the limited parts, construction moved along quickly, and painting was not too challenging with only two colors being predominantly used for both the interior and exterior. There is a detail set available for this kit (which will also work on the powered MXY-7 kit that was released at the same time as the K1) that includes a photoetch sheet with cockpit parts and a metal pitot tube. I used Model Master Enamel Interior Metallic Blue for the cockpit as well as Model Master Acryl Semi-gloss Black. There are decals provided for the control panel gauges, and these went on without issue and look convincing. The exterior was painted using Tamiya XF-12, Japanese Navy Grey, and Italeri Gloss Orange, 4682AP, F.S. 12197, which I will elaborate on in a moment. Being a simple orange over grey scheme, I applied the grey first, and after sealing it, I used Parafilm “M” for my masking prior to adding the orange. The sights were painted with Model Master Acryl Aircraft Interior Black, the landing skid braces are MM Acryl Semi-gloss Black, and the pitot tube was painted with Model Master Metalizer Steel.

When the review corps was offered the opportunity to review the new Italeri paints, I requested the Gloss Orange as I had just received this kit for review. The paint is very thick when it comes out of the bottle, which is common for acrylic paints of this type. To apply this paint using a brush, you will want to thin it with water or a thinner such as Model Master’s acrylic thinner (I had success with both). For my K1, I thinned the paint a little more than one-to-one with the Model Master thinner, until I had the consistency that I wanted. The paint went on flawlessly, with good coverage, and about three coats made the color opaque enough to cover the areas that I used filler on. The only challenge that I found was when I got a small defect on the nose (I must have set it down where I should not have), using 2500 grit sandpaper wet caused the paint to roll up.

After sealing the paint with Micro Gloss, I applied the decals, which snuggled down just fine using Micro Set and Micro Sol. The “meatballs” are in two pieces as there is a raised piece that they go over. A small rectangular decal is installed first over the panel, and, once set, the circle is placed over this. Mine went on without issue, even though I was wondering how well this was going to work for me. I did find one error in the directions for this, however, as the markings for the third aircraft shown in the directions has the circle installed before the rectangle on the left side of the aircraft, where it is the opposite in the directions for the other two aircraft markings, as well as for the right side in all of the directions. I chose the markings for Scheme 1, number 722-53 of the 722 Air Group, Gonolke Air Base, Ibaragi Prefecture, in 1945.

As far as my hits of this kit are concerned, FineMolds produced a very clean, crisply-detailed, and easy to assemble model of an Ohka trainer. The only fit issue was a slight gap between fuselage halves that was easily repaired using Mr. Surfacer 1000 and some wet sanding. The parts had no flash, and the panel lines appear to be realistically thin and shallow for this scale. My only miss for this kit was the aforementioned issue with the decal instructions for one of the aircraft.

Overall, I would highly recommend this kit to anyone wanting to add the trainer version of the Ohka to their collection. I previously built the Testors/Italeri release of the Ohka (I believe that it was a Hawk kit originally) when I was younger, and this kit is far more advanced than that one was. This kit can be made into a nice looking display piece with limited experience by the modeler.

I would like to thank the folks at Dragon USA for providing this kit to the IPMS/USA for review, to Steve Collins, who runs the Review Corps, for selecting me to do the build, and to you for taking the time to read my comments.

Left side nose and skid