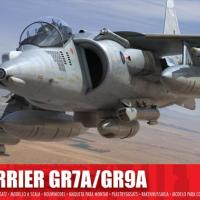 For some reason, I decided a few years ago to build a collection of 1/72 Harriers. At that time I counted 24 separate and distinct sub-varieties and markings/nationalities. There would be more if I wanted to include all the two-seaters. So far, I have completed about 18 of them, from the first P.1127 prototype through the Kestrel and first- and second-generation Harriers. The kits range from the awful (Matchbox GR.1, which I could not bring myself to build) to the barely acceptable (Hasegawa GR.1/AV-8A) into the pretty good (Airfix/Heller AV-8B, Italeri AV-8B) to the really nice (ESCI AV-8A, Hasegawa AV-8B/GR.5 and AV-8B+). When I started the collection, there was no such airplane as the GR.9, so when it entered service I resigned myself to modifying a Hasegawa kit. With the release of this all-new mold from Airfix, I could now build it out-of-the-box without a lot of troublesome carving of small plastic pieces. Actually, there is not much external difference between a GR.7 and a GR.9, so my worries were unfounded.

After all that, I think I can say that this kit is the best 1/72 Harrier kit yet. It comes in the now-familiar red Airfix box; not one of those flimsy Eastern European end-opening boxes, but a real box with a top and made of good ‘ol English cardboard – you know, the stuff the Royal Navy used to make their ships out of. There are three sprues of a softish light grey plastic with a total of 121 parts, plus a sprue of clear plastic with four parts. There are no resin or photo-etch parts. You will not use all of the parts, as there are some options, and 22 of the parts are for various stores. The level of detail is pretty good, although some may think the panel line engraving is a bit heavy. This kit offers some features that are not present in any other 1/72 Harrier kit. The engine fan is a separate part; it fits neatly into a shallow cylinder at the base of the inlet throat. The cockpit is adequate, with a floor/nose gear roof/consoles part, a three-piece seat, instrument panel, and stick. The kit includes a pilot figure, but since a flying configuration is offered as an option, it is understandable. The fuselage halves have some sidewall detail molded on them. The completed cockpit looks good, but there is still room for the inevitable after-market parts. This is the first 1/72 Harrier kit to offer complete main gear and nose gear wheel well detail as well as detail for the rear-fuselage air brake bay. Another interesting feature is the inclusion of dropped flaps. This is the first time I have seen this on a 1/72 Harrier and it is a nice touch. It is a touch that won’t get much use, however, as the flaps on Harriers are deployed only in landing or take off, so unless you are planning to complete your model in hovering mode, you have to bypass this option. Two configurations of the refueling probe are included. Initially, I was a little puzzled as to why they would do this, but after studying photos of Harriers operating in Afghanistan, I learned that they often taxied around with the probe deployed. I don’t know why, but it looked neat, so I used it. Finally, there are two sets of separate blow-in doors for the air intake parts. One is for the resting configuration with only the top doors open, while the other is for the flying configuration with all doors closed. One of the most aggravating steps in most Harrier kits is the need to rescribe those blow-in doors after the air inlets are attached and fared in. The inclusion of these separate parts makes that step easier, but you still have to be careful when attaching the inlets or those doors, too, will disappear.

Assembly is pretty straightforward. You will have to choose which aircraft you want to model before you begin. You get grounded or flying configuration, and the choice between two different GR.9As or a GR.7A. The main visual difference (so I thought) between the GR.7 and GR.9 was the configuration of the Leading Edge Root Extension (LERX). I was under the assumption that the GR.7 has the partial LERX similar to the USMC AV-8B, and the GR.9 had the full aerodynamic LERX like the AV-8B+. You know what they say about assumptions. Most of the GR.9s were rebuilt GR.7s, so they did not normally bother to change the LERX. The airplane I chose to model was a GR.9A ZD433 that flew out of Kandahar, Afghanistan in 2009. That aircraft actually was built in 1989 as a GR.5, and has been continually upgraded through the years. It did not have the extended LERX. It is better to choose whether you want to display it in the in-flight mode or not at this stage. If you want the in-flight mode, you can leave out a lot of interior parts. There is no stand included, however, so how you make it hover is up to your imagination.

The cockpit assembles easily. I had to add a couple of cockpit harness parts because I left off the pilot figure, and some of the harness is molded with him. There are a number of parts to be trapped in the fuselage, such as the intake trunk (if you work at it, it can be installed upside down, so be careful), the cockpit assembly, and the main gear bay. There are also some holes to be opened. Once the fuselage is assembled, you have to trap the tail planes by inserting a cap into the tail stinger. The two tail planes are joined, but mine was broken in transit. Although I was able to repair it, it was not a strong joint, and the tail planes on my model do not move as they are supposed to. When you attach the LERX part of your choice, be very careful of your alignment. Unless you clamp the LERX tightly to the wing-fuselage assembly, you run the risk of a big step on the top of the fuselage. I have a nice ratcheting clamp from Sears that smoothed out the joint and, when the glue was dry, it was smooth as a....well, a Harrier’s top.

The fit of the parts was pretty good, for the most part. I had to use a little putty under the LERX at the fuselage; where the LERX met the wing on the top of the fuselage; and where the bottom wing inserts were joined to the wing top part. The joints lay along real panel lines, so after the gaps were filled and sanded, the same panel lines had to be rescribed. There is also a very faint mold seam along the top of the canopy that has to be sanded off and polished out. It’s hard to see, but it sure would show up in a contest.

There are painting instructions and decals for three aircraft – a GR.9A ZD433 from the Harrier detachment of “Operation Herrick” in Kandahar, Afghanistan in 2009; a GR.9A ZG506 on display at RAF Cottesmore in 2010; and a GR.7A ZD404 from the Harrier Detachment at Kandahar, Afghanistan in 2006. At first glance, the painting instructions, which are printed in color, seem startling. The GR.9A based in Afghanistan seemed especially unusual, featuring highly contrasting shades of grey. As it turns out, the colors on the painting instructions were exaggerated for effect to clearly show where the color lines should be drawn. The actual colors, once applied, are not nearly so garish. One minor annoyance was the incomplete painting instructions. The color call-outs referenced only Humbrol numbers for most of the detail painting. Nowhere on the instructions did they translate that to real color names. Luckily, I have a Humbrol color chart that told me that 33 was flat black and 162 was light gray. The instructions for the camouflage painting did have titles for the primary colors, but you were left on your own for the detail colors. I suppose that approach works in the UK where Humbrol paints are readily available and there is a good commercial reason for the tie-in, but in the US where Humbrol paints are scarce, it was aggravating.

Let me tell you, there are decals galore. Fortunately, they are not all necessary for each subject. There are still plenty of little-bitty decals to apply, a fair number of them to the stores that are supplied with the kit. The decals are printed by Cartograf, and they were in perfect register and went on easily with the usual precautions of a glossy undercoat, overcoat, and final dullcote. Most of the small stencil decals were too small to be closely trimmed, and I was a little apprehensive that I would have some silvering with them, but they all turned out well.

The stores are impressive. After building several of the Hasegawa Harriers, I grew used to cannibalizing other kits as the Hasegawa philosophy is to make you buy after-market stores to complete the model. The Airfix kit had two drop tanks, two rocket pods, two Paveway guided bombs, a Sniper pod, and a Recce pod. It also included two Sidewinders, but I left them off as they didn’t get much use in Afghanistan.

This is easily my favorite of all the 1/72 Harrier kits I have built over the years. That is not to say that it just falls together – it doesn’t, but the level of detail and the overall engineering made it a pleasure to build. There are a few things I wish they did differently: the lens on the nose-mounted FLIR is a raised line that did not survive the first swipe with the sandpaper. It would have been nice if they had provided a decal for that lens. I replicated it with a dot of gloss black paint. The exhaust nozzles (and their enclosed vanes) were split in half. The assembled nozzles had some nasty inside seams that were impossible to eradicate fully – I would rather they had provided separate parts for the vanes. Another minor nit-pick: they seem to have left off any representation of the wingtip lights. Those little blobs on the wingtips are not the lights. You will have to paint them onto the wingtips without guidelines.

I would like to thank Airfix for providing the review kit and IPMS/USA for allowing me to review it. I liked this kit so much I even bought another one to build when the inevitable flood of after-market detail parts are available. Now that the US Marines have purchased all the ex-RAF Harriers, who knows what interesting new markings these things might wear. What the Marines intend to do with these aircraft is not entirely clear; the speculation ranges from breaking them up for spares to using them to replace time-expired F/A-18s. Regardless, this kit is an excellent representation of the final chapter in the long and glorious history of one of the most innovative and effective aircraft to ever fly for the RAF. Highly recommended.