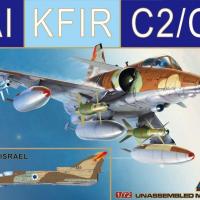 Avantgarde Model Kits (AMK) of Macau has been manufacturing some wonderfully detailed and unique aircraft models since 2003. The level of detail and finesse in their moldings is on par with those of Hasegawa and WingNut Wings kits. They have released several 1/48th scale aircraft models including the MiG-31, the Fouga CM 170 Magister, and a IAI Kfir C2/C7. One of their recent offerings, and subject of this missive, is a 1/72nd scale version of the IAI Kfir C2/C7.

The IAI Kfir is an is an Israeli-built all-weather, multirole combat aircraft based on a modified French Dassault Mirage 5 airframe, with Israeli avionics and an Israeli-built version of the General Electric J79 turbojet engine. The Kfir has been deployed by the IAI, Ecuadorian, and Columbian governments.

Several Kfir's, designated as an F-21 ATAC, have been leased to the U.S. Navy and U.S. Air Force as adversary and aggressor training aircraft. There is an export version, the C10, that houses an improved radar and avionics suite. (Technical note: Suite is a technical term for way newer or more advanced stuff.) Should you so desire, there is an aftermarket, resin kit to convert this 1/72nd scale AMK kit to a

C 10 available from Scaleworx Resin. But that's for another time...

The models light gray parts come packaged in plasticine bags. There is a small sprue with clear parts for the positionable canopy and some formations lights. The cool parts are the under wing stores. There are all slide molded (no seams) and packaged separately. You get an impressive weapons load that includes four Python-3 AAM, six Mk. 82 dumb bombs, four GBU-12's, and four Griffin LGB's. AMK also includes the appropriate ejector racks/pylons with sway braces and subsonic and supersonic fuel tanks. Consideration of the weapons load is a concern you need to decide early on. There are a number of holes to be drilled out in the lower wing depending on which version you choose.

There are parts for two different styles of ejection seats that were employed in this aircraft. The nasty looking seam down the middle of the two seat halves is nicely hidden by seat cushions. AMK also provides instrument panels for either the C2 or C7 versions. You have the option to either paint the panels or use the provided decal for the instruments. Most of the sprue attachment points and the odd seam that are hidden or otherwise dealt with through the engineering of the parts for this kit. A Tip of the Hat to AMK Model Kits for that excellent effort.

Assembly is pretty conventional with the fuselage halves being put together, then attaching the upper and lower wings, splinter plates, and the canards. Next is all the landing gear stuff (struts, doors, etc.). The main landing gear struts attach to the upper wing via a small mounting pin that fits into an open slot/hole on the upper wings. This leaves a small hole in the upper wing that needs to be filled and sanded smooth. Nothing insurmountable but it seems an odd engineering design choice. Of course, you could resort to a time-honored technique for hiding blemishes used by armor modelers and place an in-scale shop cloth or tool box over the offending area.

There is a nice representation of the Israeli-built J79 engine with nice detail, particularly the flame holder and exhaust nozzle. It's kind of a shame that most of that detail will only be known to you, dear modeler. Your private moment of Zen.

[On a side note: The next time someone is questioning the inordinate number of model kits lying about, you can simple mention that this hobby is really a quest for spiritual fulfillment. For full effect you may want to have the incense burning before hand.]

The last build step is attaching the pylons and ejector racks for all the ordnance that your heart desires.

Next is the painting part. AMK has included markings for five different aircraft. They are:

When I say includes markings for...I mean just that. The vast number of decals provided for the warning stencils, wing walk areas, and such may take you a while to apply. AMK provides four view color drawings of each scheme. I decided upon an ATAC version with a bit of a twist. I found some photographic evidence for a two-tone sand color scheme. The pattern looks to be reminiscent of the one in use with the F-35. All of the decals are nicely printed and apply easily. AMK even furnishes the stripping for the some of the ordnance. How cool is that? A word of caution: I had some discoloration issues after using a setting solution (Tamiya Mark Fit) on some of the decals. I found that H2O works just fine and the remaining decals settled down just fine.

AMK Model Kits is to be commended for providing some nice crisp molded detail throughout this model, the engraved panel lines are just the right depth. Further enhancing the overall look of this kit, small details (air intakes, cooling vents, antenna, cannon muzzles, etc.) are provided as separate parts.

I encountered a few areas where the parts didn't quite fit as one might like. Some of that might have been me but the problem areas I found were around the joint between the fuselage and the wing assembly and the separate air intakes. I believe that if I had taken more care with that part of the build most of those problems would have been eliminated.

Still, there is a lot to like about this kit, so much so that you may want to get several. One note to illustrate my point is the scale thinness of the landing gear doors. That attention to detail, along with the number of markings options, and the beaucoup ordnance make this kit worthy of anyone's stash.

My thanks to Avantegrade Model Kits for the review copy.