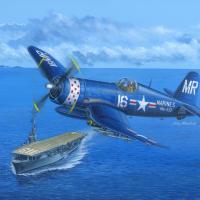 F4U-4: The last variant to see combat during WWII, the Navy took deliveries in late 1944 and had two fully operational squadrons by the end of the war. The type incorporated a lot of changes over the F4U-1D. Most notable is that it had a more powerful engine with a new four bladed prop.

F4U-4B: Designation for F4U-4s to be delivered to the British Fleet Air Arm but were retained by U.S. for its own use. The British received no F4U-4s.

Inside were 190 well packaged parts. My sample was near perfect and I couldn’t find any flash or blemishes, just a few very faint sink marks. The clear parts are very thin and have a crystal like appearance. There’s an instruction booklet and a nice double sided color-plate showing two decal options. The decal sheet came well packaged in a poly bag with a wax paper slip. The two options include a Marine bird from VMA-332 flying from the USS Bairoko, 1953 and a Navy bird from VF-53 assigned to the USS Essex, February 1952 Korea. Notable options include; choice of extended or folded wings, positional flaps, separately molded control surfaces and a pair of drop tanks.

I began this build with the cockpit and found the detail barely adequate. I added aftermarket seat belts and that helped but it could really use some additional detailing. The instrument panel and console decals are a bit on the cartoon side but I used the IP decal anyway and dry-brushed the rest.

The engine is really a nice surprise and looks great when completed. It features a accurate and delicate exhaust system that requires a little extra care to get it right. By design Hobby Boss would have you add the unseen rear engine plug. Sure it looks nice but by doing so would mean that you would have to install the engine when you mated the fuselage halves. To make it easier I decided to forgo the engine plug and add the engine after the fuselage halves were joined. Another accurate but delicate item was the tail gear and arrestor hook assembly. You have the option of either a hook up or down by simply changing the hook’s hydraulic ram. There is also an aft bulkhead and extra ribs to be added into the tail gear bay.

After closing up the fuselage and adding the tail pieces I started working on the wings. Since the Corsair is such a beautiful airplane I decided to leave the wings unfolded. One feature I found a little puzzling, the ammo and gun lockers panels are molded apart from the wings and this is done very nicely. However there are no guns or ammo or gun and ammo bays, just empty openings. Another annoyance that bothered me was the flaps; I could not get them to fit properly in the down position and gave in to leaving them in the up position. The rest of the build went pretty well, needing only a little filler on a few seams.

I highly recommend this one.

I want to thank Hobby Boss for filling another box with such fine pieces of plastic. I am glad for Squadron MMD for supplying this kit and I say thanks. And thanks to IPMS for allowing me to build and present this kit.