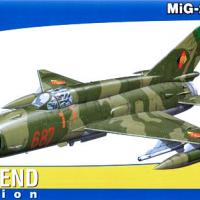 Eduard Models from the Czech Republic has chosen its MiG-21 series to be one of the mainstays of its plastic model line. Reasons to choose the MiG-21 series abound: it has been flown by many different air forces on different continents, it has been finished in desert, tropical and natural metal finishes, and it is one of the icons from the Cold War.

The kit comes in 9 sprues and a total of 464 parts. Don’t be scared by that number since about half of the parts are not used – mainly underwing ordinance that it is worth saving for other builds. There are many, many small parts in this kit. But Eduard has extra small sprue gate connectors attached to them, making it easy to clean them up before assembly.

Being the “weekend” boxing, this model comes with no photoetch or masks and only one decal option. The decal sheet is printed by Cartograf and it is outstanding in quality and extensive in the number of stencils offered. However, I was really not able to read them all (not that I care). Instrument panel and cockpit side panels are included in the decal sheet, but not seatbelts. It would have been nice to have them, though.

Construction follows a logical sequence, starting with the cockpit, landing gear well and tail pipe, then moving to the main assembly of fuselage, tail surfaces and wings, and finalizing in the landing gear and ordinance.

I want to emphasize how outstanding the engineering of this kit is. If you take care in preparing all the parts – i.e. remove and sand the sprue gates – the fit is virtually perfect. At the same time, the engineering takes care of most of the seams. For instance, the fuselage spine and the rudder cover the whole upper fuselage surface, negating the need to sand that long and obvious seam! Great work, Eduard!

I did have a few issues building this kit and I would like to comment on them. The cockpit consoles are provided as a decal. I’m fine with that. But the modeler is supposed to scratchbuilt a few flat plastic plates where the decals are applied. I wish those parts were supplied with the rest of the kit. In my case, I’ve applied the side console decal to the inside of the fuselage. Not perfect, not accurate, but I was building this kit “closed up” so I wasn’t really worried about it.

I only had to use filler for a very minor gap in the join of the wings with the fuselage. I used some Bondo and cleaned it up with a swipe of acetone-based nail polish remover. I think it is possible to get a few small spreaders inside the fuselage to avoid the need to use filler. Dry fit your model and decide what you need to do.

The very last comment I have about the kit is the nose landing gear. It is very nicely molded and it has great detail. But it is very delicate and almost fragile. The fork that holds the nose wheel consists of 3 parts that need to be attached to the nose landing gear strut. Getting all those parts at the correct angle is a bit of a challenge. When you consider that the nose landing gear supports the weight added to the nose to avoid becoming a tail-sitter, it puts a bit more strain on the part than probably is needed. Having said that, I took care to not put any stress in the nose gear for 24 hours after all the parts were glued, so as to give plenty of time for the cement to have set. Everything holds just fine.

I finished the model using enamels and painter tape for the splinter camouflage. I applied the decals over a coat of Future and the decals behaved wonderfully. I actually made a mistake with one of the national markings. I realized I had one of them in the wrong orientation the day after being placed. Using Micro Set I was able to float the decal again, rotate it around and have it re-seated. My hat is off to Cartograf for designing such a thin decal that can survive such a level of handling (should I say “abuse”?).

After another coat of Future, I applied an oil wash and filter to weather the airplane lightly. This is a Cold War warrior and, as such, I expect they were kept in fairly good shape, so I did not apply any further weathering.

Assembly of this kit took me about 12 hours and about 6 hours were in painting and masking. Decaling took a surprisingly long 5 hours, mainly due to the large number of stencils applied. Note that I did not include any underwing pylons/ordinance on my kit or it could have been another couple of hours applying stencils there.

Is this kit over-engineered? You might think so, based on the number of parts and how small some of them are. However, I would say that this model has the proper balance between level of detail and smart engineering, where some parts are independently molded so as to hide a seam beneath it.

Did I have fun? You bet. I have not enjoyed building a model OOB this much in a long, long time. If you are into jets, you need to treat yourself by building one of these. You will have a great time.

I would recommend this kit to intermediate modelers, due to the large number of small parts. I want to thank Eduard and IPMS/USA for the review model.