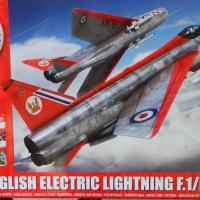 Thanks first off to Hornby/Airfix for sending IPMS/USA this kit, and keeping the brand alive! If you have not built one of the new Airfix kits, you need to get over to the store and buy one, or several. HELP KEEP THEM IN BUSINESS, as Airfix has many economical and fantastic kits. Kudos to John and Phil to providing it to me to review.

Airfix’s re-release of their venerable 1/48 English Electric Lightning kit is a welcome return of an old friend, not one of their newest molds. When originally released in 1997, the kit was considered ground-breaking with "state-of-the-art" molding technology. The parts fit was lauded as best available, with detail impeccable for the time. This kit and the Spitfire Mk 22/24 and Seafire FR46 were the "new Airfix" in the late 1990’s for a short time, but this kit was one of the best at the time.

The Lightning F-1/1A was first out the door, with its small fuel tank on the belly. This kit was rapidly followed by the F-6 with a totally new fuselage with large underbelly tank and over-wing tanks as optional parts, including gun panels for the lower fuselage tank area for the few fitted with that setup.

When I opened this kit box, I saw nothing has changed. There are three different marking options, one overall aluminum F.1A with red "Firebirds" aerobatic team markings stationed at RAF Wattisham, Suffolk UK in 1962; One overall natural metal F.1 with a black spine and fin with the "Bengal Tiger" marking on the tail of No 74 Squadron based at Coltishall, in Norfolk, UK in 1962; and one F.1 with Dark Sea Gray and Dark green over natural metal undersurface camouflage, based at RAF Binbrook, Lincolnshire UK in 1980 with the Lightning training Flight. See their website (above) for color Pictures.

Out of the box construction is simple. Please, however, remember to fill the nose bullet shock cone with ballast weight, or you will end up with a tail-sitter. This assembly fits between the intake duct and is placed in the nose section. Be careful not to cement the front ducts to the sidewalls. The nose ring needs to fit over this part, and if you cement in place, it’s almost impossible to get a good clean ring fit. (I tried the D-mold intake ring to see if it improved the kit item, which it did. What I really miss are the 1990’s Aeroclub aftermarket metal lightning nose rings, because they polished up very nicely and helped with the nose weight issue).

Speaking of aftermarket: there are currently available a set for the augmentors (afterburner cans), nose Radome with integral gear strut and tire, and wing wheel wells, which were some of the first available resin or PE sets out there. Some sets were better than others, and the wing wells could really use the aftermarket, even if you have to spend quality time with a Dremel® tool and grinding bits to thin the plastic. (Be careful if you do, as the plastic readily melts through even under low speed).

The two weapons loads, both Firestreak or Redtop air-to-air missiles, were well-detailed complete with clear noses (the facets on the Firestreak were impressive) and, when painted and marked with the ‘rare for the day’ weapon decals, marked a major step in accuracy for the day. The cockpit was even relatively well-appointed, although the aftermarket crowd was extremely rapid in responding to detail in this area. The ejection seat even had the overhead "bow-tie" pull handles.

As I began, I determined the particular Lightning F.1 from Binbrook I wanted to build had two cannon in the upper nose area which required drilling out. These panels are separate and fit very tight, and had indentations for the barrel troughs. I attempted a drill session and broke my 1/32 bit. Dangit. Never mind, I had it mostly completed. The instructions have you check which alternate parts fit and need to be obeyed to keep things straight.

The same fitment can be stated for the air brakes on top of the upper aft fuselage. I have never seen them open on the ground on a static Lightning, except in deep maintenance with safety Rams and flags in place, so I gently pushed them in place, and sealed with a bit of thin cement once they were flush.

The cockpit parts were addressed now, and here use of an Aftermarket MB Mk 3 seat is worthwhile. If you close the canopy, there is really little to see for anything else like a full aftermarket set, so the choice is yours. After a lot of grinding, I got the thing to fit. Also, now is time to drill the holes for the appropriate cable run attachments and antennas/fuel dump masts and such on the internal sidewall external details. Check your source for the variant you are building, and then ‘tis time for cementing the fuselage halves together.

I was going to use aftermarket exhaust burner cans, and determined I would not see that far down the coal hole, so opted to use the kit items, carefully cemented together and painted. This then almost clicks into the tail section, making a great holding dowel location for painting the model.

Wings are assembled next, (do your thing with the wheel wells if desired) and then cement to the fuselage. Downhill slide here! (and if you are doing a jet with the air refueling probe, don’t neglect to cut open the holes for mounting THAT on the interior). Flaps can also be fitted now, up or down, but leave off the horizontal stabilizers, they are easy to snap off. The fin is a nice tight fit, and worth installation now as well. Make sure you use the correct fin for either the F.1 or F.1A (which is the same fin as the F.6)

This is a good time to paint the exterior. Canopy masking, installation, etc. all come in to play; if closed, mask on and press on. If open, mask the hole, the canopy bits, and paint.

After painting, decals are next. A flat-finish set, there are a LOT of them, stencils, etc., and the kit decals worked perfectly, settling settled down after a light coat of Daco decal solution. The decal map works great, and is multi-color to make sure you use the right ones on the version you are building. The decals themselves are sufficiently durable to be strong and "workable", but still behave. An overcoat of Johnson’s Klear (or whatever you use) permanently fixed them in place and added to the overall coherent exterior look of the real aircraft. I coated the final aircraft with Future floor finish, as the flat decals needed to be glossed up and also needed a method to seal them into place.

Minor weathering and dirt were applied. The lightning is notorious for exhibiting a rather tatty lower fanny and underside, and you can pretend it’s a ground-target (tank) here. I left mine a bit clean.

Wheels, tires, and landing gear fit nicely in place. The Firestreak missiles are almost perfect, and the mounts fit as well. Just make sure they are not pointed nose up or down, and parallel to the ground.

The pitot tube is very long, and actually pretty well done if cleaned up carefully. Installed and painted, it is a noticeable feature, warranting aftermarket if you expect a lot of handling. I did not have one on hand, so the kit option was the correct solution.

End of build: Great! This kit is a ten level, with a few nine level details due to simplification as part of the age of the kit. Thanks to Airfix for sending the kit, and Phil and John for forwarding for my review!