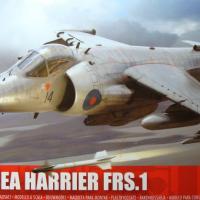 I don’t usually build aircraft which do not have propellers but I like Airfix models and I like the Harrier. It’s an incredible bit of engineering that allows a jet to hover like a helicopter! So, when Hornby-Airfix provided this kit as a review sample to IPMS/USA, I jumped (no pun on the phrase Jump-Jet intended) at the opportunity build an Airfix Harrier.

This kit has a long history. According to the Airfix Tribute Forum the kit was first released as # 9 05101 in 1983 and remained in production to 1985. It was reissued as kit # 05101 from 1986 through 2007. Revised sprues were added to update the model in 1988 in kit # 05102, and then again in 1997 for kit 06100. The release being reviewed, kit # A05101, was released in 2012. The kit does show its age in certain aspects and it is not the most “accurate” kit on the market, but accuracy isn’t what interested me when I began this project. I am attracted to Airfix kits because I find them immensely enjoyable. That pleasure comes from my early days in modeling (late 50s through the 60s) when I bought what I considered to be “exotic” kits from a “distant land”. More than the nostalgia, I find that kits such as this Harrier provide hours of relaxation, providing enough detail and engineering to produce a very nice model when completed, but without the extra and often unnecessary burden of a kit that has been over-engineered and is unnecessarily complex and difficult.

The project revealed some issues that should be pointed out. None of these issues are deal-breakers nor did they add any significant time to the project or diminish the enjoyment of working on the model.

The decals are provided on a single sheet and are, to say the least, numerous. There are over 100 decals representing stencils, national insignia and various other sensitive areas on the aircraft’s surface. The decals have very little carrier film around them so no real effort is required to cut that carrier film away. The decals took only about 20 to 30 seconds after having been dipped in water before they were ready to be applied. The markings adhere quickly, so getting them in the correct spots with minimal relocation afterwards is advised. The decals, when pressed down to extrude surplus water from underneath, adhered to the model and snuggled nicely over any of the detail molded on the model surface. Because of the compound curves found on the fuselage some of the decals had to have some small slits cut into them in order for the decal to seal up and attach properly to the curved surface. When applying numbers 62 and 63 be alert. It is easy to place the decals on the opposite sides of the cockpit for which they are intended. It is advisable to view the decal using a magnifier, and when doing so, one will see that the decal reads, “From either side”. When applying these two decals be sure to position them so that the illustration accompanying the words is “forward” and the words are “aft”.

There are optional parts for those who wish to display the model in the “in flight” mode. Two different sets of wing tip gear are provided. One set is for “gear down” and the other set is for “in flight”.

I highly recommend this Hornby-Airfix Harrier to all modelers, especially those who are fairly new at modeling or who wish to branch out and get into jets. There is a sufficient level of “challenge” in the project but it will not overwhelm the novice or will it cause problems for the more advanced modeler. The instructions are easy to interpret, the decals are of very good quality, and the parts fit nicely with a minimum of seam-work required. The clear parts are sturdy and molded well, with no visible imperfections. This project was fun and enjoyable from start to finish. Thanks to Hornby-Airfix for the opportunity to review this kit.

Finished kit, beneath
Previous Next