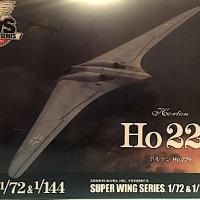 This is the 72nd scale build from this box. John did the 1/144th scale one a bit earlier.

Zoukei-Maru are known for very detailed kits with interior parts in 1/32nd and 1/48th but this is the first time they have delved into the smaller scales, and on this 72nd scale kit they have decided to go for the full interior structure as well.

While I haven’t seen any of their larger kits in detail, I was a bit disappointed in the molding of this kit. There are lots of molding seams and bits of flash throughout this kit. While that isn’t a real problem, as it cleans up easily, it was just something I was not expecting.

One other thing that caused me and my fat fingers issues was trying to get all this lovely internal detail to stay put. The connecters are also scaled down which makes the process of getting things to line up a bit of an experience. If I were to build this again I would probably try CA glue for the interior bits and probably some accelerator. I think this would give you a chance to get the structure together all in one go and save some fit issues later.

That said the detail on the kit is superb from the interior, cockpit, engines, the surface detail all nicely molded, and looks great once it is all together.

The build starts with the engines and as usual for Z-M they supply both full engines which build up from 8 parts each. They do look really nice when done though I had some alignment issues on mine.

Next is the cockpit which is very detailed and includes a decal for the instrument panel which settled well with Micro Set and Sol. You really need to do steps 3 and 4 at the same time to ensure you get the fit correct. I did it over 2 nights and had some problems. The only thing missing was some seatbelts which would have been nice in decal form in this scale.

Steps 5-14 all deal with putting all that lovely internal structure together and adding the guns and engines. I really think if you do this in one sitting by using super glue you can get a much better fit than I managed. I put this down to my skills and not the kits design.

You build the wings in steps 15-20 and this is where my only other issue with the kit comes in to play. It is designed with all this internal structure but the instructions tell you to glue the outer skin panels to the interior nullifying you of seeing all that work.

Between steps 20 and 21 is an important notice to check the fit of the body parts before proceeding.

The next 4 steps have you add the wings to the fuselage structure and then glue the body panels starting with the top rear, then the bottom two ,and finally the nose and engine covers. Again, you are advised to glue the covers on. I decided to take a picture of what the whole internal structure looks like before doing these steps as I want to remember all that detail that I worked so hard to get together.

I also found out that I obviously didn’t get something to fit correctly as I could not get the nose piece to set back far enough to fit which lead to having to resort to some Tamiya putty. If I had done this all correctly throughout the build I am sure I would not have had to use any putty.

Some other positives before I finish up are there are multiple drawings throughout the instructions that help show how parts are supposed to align. These show side, top and front aspects so your can really see how things are supposed to fit as you go along. The other is the way the wings attach to the structure and then the top and bottom panels attach to the wings really does insure a good fit.

The final steps are for the tricycle landing gear which includes molded on hydraulic/brake lines, some antenna and the canopy which was nice and clear. These were all added after the paint job.

The color callouts throughout the instructions are given for Vallejo Color and Mr. Color paints. I used Tamiya pretty much exclusively except for some MMP Tire color for the, um, tires. I also used a bottle of Modeler Master Acrylic RLM 66 for the cockpit and wheels.

Since my airbrush is still in the box (I need to redo the model room to make some space to set up) I used Tamiya rattle cans colors for the interior, AS-18 Light Gray (IJA), (which was mainly done on the sprues) and exterior, AS-2 Light Gray (IJN). John had already done the camo version for his build and I didn’t want to do a nightfighter without radar, which is the other kit option so did mine as a what-if prototype. The actual prototype was engineless, but think they had to do one up with engines so there you go. I did use the kit decals for the top crosses, wing(nacelle) walk, and engine octane marking, but had to source a couple more black crosses for the underwings. These came out of the old ProModeler Bf-109G-10. The model was coated with Future (the real stuff) and the decals added with no issues again using Micro Set and Sol. The kit included many extra markings including 2-part swastikas so you can make pretty much any what-if late war flying wing you want. Tamiya TS-80 Flat Coat covered the build.

I left one of the engine covers and top wing covers off so you can still see some of the internal details.

If 72nd is your preferred scale you definitely can get a great detailed model with this kit. Just take your time, use CA, and check your fits. Then you just need to decide whether to leave all the panels off and show off all the interior detail or cover it up. Would also be pretty easy to build it in sections like the one survivor currently is at the Smithsonian.

Thanks to Zoukei-Mura and IPMS/USA for the review kit.

Finished wing off side

My gaps on the bottom

My gaps on the top

Top without wing cover
Previous Next