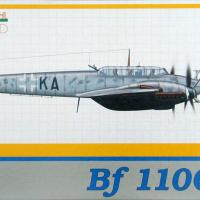 Eduard has released its Messerschmitt Bf-110G-4 in the Weekend format. I appreciate Eduard releasing kits in the “weekend” format as a more affordable channel for modelers to get access to a kit. This is the most expensive kit ever boxed in the Weekend format ($39.95) but you get a lot of plastic for your money; as a reference point, the Profipack version retails for $64.95.

So, what is in the box? You get all the plastic sprues from the Profipack packing, except sprue D (underwings ordinance). The decal sheet, printed by Cartograf, has one option and stencils are included. The box includes 11 sprues for a total of 349 parts. I should mention that you get over 100 parts (mainly from the 110E) that go straight to the spares box. The kit does not include photoetch nor canopy masks.

The box is so chock-full of plastic that during construction I decided to use a larger box from a different kit as to not get the sprues too tightly packed and to have a little bit of room for staging sub-assemblies during construction.

The cockpit is beautifully detailed. The instrument panel looks very good when carefully painted, with appropriated raised detail for dry-brushing. The cockpit tub itself has about 50 parts in total (similar number of parts than other full airplane kits I’ve built!) and with careful painting it is unsurpassed in detail for a plastic-only interior.

Closing the fuselage was an easy task. I had to do very minor sanding on both sides of the cockpit tub to get a nice fit. After that was done and set aside to dry; I moved into the wings. The instruction calls for drilling some holes in the lower wing halves. Those holes are intended for the drop fuel tank braces. That is a minor problem. There are no drop tank provided with the kit although the braces are provided (drop tanks are in the ordinance sprue D only available in the profipack packing). Still there is no reference whatsoever in the instructions as to install the braces under the wings and you would end up with 8 holes under your wings. Just make sure you remember that there are no drop tanks included in the kit and make your decision to either drill the holes and install the braces or to leave the wings “clean”.

Fitting the engine nacelles into the wings is the major disappointment of the kit in my opinion. There are some gaps and seams that need to be filled and sanded. I actually needed 3 sessions of filler/sand/priming before I got the nacelles to blend in with the wings. I would suggest doing most of the filling and sanding before attaching with the wings to the fuselage.

Attaching the wings to the main fuselage is probably the second disappointment of the kit. I had to file the wing tabs to get them to fit the fuselage slots and still I had to do some filling and sanding. This time one sanding session was enough to get a nice and smooth wing-root join.

At this point I knew the kit was in the final run before paint. I had to attach the nose and the tails surfaces. The latter were easy and straightforward to do.

For the nose, I had to choose if I wanted to be open and displaying the nose interior or not. As this kit is a nightfighter, I wanted the radar antennas to be the focal point of the nose, hence I decided not to build the nose shelf for the cannons and keep the nose closed. I had no troubles here. The new nose for the G-family fits like a charm.

I wanted to finish this kit in as 9W+BO with 6.NJG101, using “Nocturnal Birds of Pray - Part 2” from Aeromaster (Sheet #48-321). I was lucky enough as to find online 3 pictures of the aircraft which I used as reference.

Based on the pictures, I was able to determine that the aircraft had an overpainted “V” in the lower side of the port wing and a fuselage band. Those are tactical markings used by the Luftwaffe in the eastern front, in late 1944-early 1945. I decided to model my kit before the “V” was overpainted, as to provide some interest to the lower surfaces of the aircraft.

Also from the pictures I’ve determined that the radar antenna mounted in this aircraft is different from the one indicated in the instructions. Not a big surprise really, as it is a different aircraft. Luckily for me, Eduard provides parts for other radar antenna configurations, including the one I needed.

Decals were applied over a coat of Future. I’ve used the tactical markings from the Aeromaster sheet and the national markings from the Eduard-provided sheet. Decals from both sheets behaved perfectly. I’ve applied a few selected stencils to the model. Based from the pictures I’ve found online, the national markings were painted over the squiggles. Therefore I decided that some stencils might have been painted over the squiggles as well.

In parallel with the assembly and painting stages I spent time masking the large greenhouse canopy. I wish Eduard would have included a mask or at least make the mask available as a stand alone product. It actually took me about the same amount of time to mask the whole canopy than to do the camouflage pattern. Once the canopy was fully masked, I’ve airbrushed a fine mist of RLM 66 to simulate the internal frames and then I’ve airbrushed RLM 76 on top. The lighter color needed two coats to cover the darker gray. All coats were very light, as I didn’t want to overwhelm the mask and risk having some bleeding under.

Gluing and aligning the multi-piece canopy (8 parts) it is a little bit of a challenge. I would recommend beginning gluing canopy parts from the back adding parts towards the front. Once you reach the pilot seat position, add the windscreen and finally the canopy parts that sit by the pilot sides. I had to do a little bit of filing on those parts to get an acceptable fit

The undercarriage assembly is delicate. Somehow I managed to break loose the port landing gear after having assembled it. I re-glued and so far it is still in place. I’m very careful when handling the model now.

Similarly, the radar antenna assembly is extremely delicate. Care is needed when removing parts and when handling them, particularly the radar dipoles. You are kindly provided with 20 antenna dipoles even when only 8 are needed for the assembly… and Eduard knows why to provide you with the extras! I’ve managed to damage 2 dipoles during assembly. There is a very faint mold line in the dipoles and they benefit from a light sanding. I should mention that the radar antennas were assembled for evaluation but not used in the final assembly. I’ve used Model Master 48-027 FuG 220 Sn-2b which are reviewed elsewhere on the website.

A very challenging point regarding the radar is that no location points/alignment pins are provided for the antenna struts. There are some drawings in the instructions, but that is all. After a few attempts, I ended up drilling holes in the nose and in the antenna struts and adding some copper wire to strengthen the joint and to facilitate alignment. I did all this after assembling the nose to the fuselage. In hindsight, I wish I would have done all that work when the nose was still as a sub-assembly.

The engine exhaust shields are nicely done and delicate. Their assembly is not difficult, but I had to trim some parts to get a better fit to the engine sides.

This kit is arguably the most detailed Bf 110G-4 that can be built using only plastic parts. The trade-off is being a complex kit with over 200 parts (plus over 100 that go to the spare box). Fit issues are located mainly around the engine nacelles and wingroots. A challenging point is the lack of positive alignment for the antenna radar.

Despite being a complex kit, I’ve enjoyed the most of time I’ve spent building it (close to 45 hrs if you are wondering how long it took me). Lack of alignment points for the antenna and having to mask the greenhouse canopy were a little bit frustrating. FYI: I’ve contacted Eduard and suggested them to release the mask set as a stand-alone product.

This kit is recommended for the intermediate to experienced modeler, due to the high part number and fragility of some parts. If you are prepared to put some work and modeling skills into this kit, you will be rewarded with a wonderful replica of a Bf 110G-4 night fighter.

I would like to thank Eduard for the review sample.

The Need for Filler
Previous Next