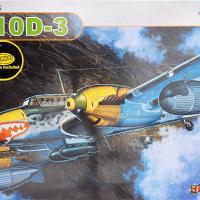 The Bf 110 was envisioned by Hermann Goering as a heavily armed fighter-destroyer escort for the Luftwaffe’s bombers. With its four machine gun and two cannon armament it was a deadly opponent as long one could position the aircraft to take advantage of it. Problem was, as so many other countries found out, the idea of a heavy twin engine fighter competing against smaller single engine fighters of equal or greater horsepower just didn’t pan out. Physics simply did not allow it. Early successes against inferior aircraft were soon reversed when the Bf 110s met their match in the Battle of Britain. In spite of being what many could argue was an obsolete design, the Bf 110 soldered on in various versions until the end of the war. It proved especially effective in the night fighter role which capitalized on its multi crew seating and ability to carry a lot of firepower. The Bf 110 D-3 in this kit was designed for long range escort/patrol. The wings were plumbed to take drop tank connections and the tail was lengthened to accommodate a life raft in the event of trouble while patrolling over water.

Cyber Hobbies rendition of this aircraft is nothing short of a masterpiece of the mould maker’s art. “Its all in the box,” sums up this kit. The top open box is adorned with a nice color painting of the one of the two marking options but the real treasure is inside! Three hundred plus pieces of grey plastic nirvana await your modeling pleasure. Everything is here and it all works. The surface detail is wonderfully reproduced on every part. The clear parts include injected one piece or separated canopies. There are decals for two versions, a small PE fret of seatbelts and RDF loops and a pre-bent piece of wire for a fuselage antenna. Panel lines are recessed and vary in degree of relief. There’s a nice fabric effect on the surfaces where it should be. All control surfaces are separate parts including flaps and slats. Slide molding means the guns have hollowed ends. Oh and I almost forgot, if you buy the first run you get two complete DB601 engine assemblies! OK, it looks awesome in the box but what about the build?

I couldn’t resist building the “bonus engines,” first. These are very well done and almost fell together. Everything seems to interface well in terms of engine, firewall, and nacelle. I decided to install one engine and keep the other out to see how the fit worked both ways. Next, was the highly detailed cockpit which reproduces the real thing very well. Good thing too, because there’s a lot of canopy to see through! Don’t forget the elevator trim wheel (part F 12) which is provided but not mentioned in the instructions. My only improvement would be the instrument panel which has blank circles for dials. The MG FF/M cannons that fit under the cockpit floor are perfectly cast but sadly are not seen once the fuselage is glued up. The ammo magazines do connect to them from the top and are barely visible through the cockpit. The machine gun pack in the nose is completely reproduced. You get to chose from three options how to display them. Now lets see how this all fits together. The cockpit/fuselage half interface was good. I had to sequentially glue the joint and clamp it to get a tight fit. The wing interface is assisted by a spar carry-through part that aligns and strengthens the joint as well as establishing the proper dihedral. I got into a little trouble when trying to fit the engine into the wing halves. The instructions suggested preassembling the engine, firewall, gear well and cowling parts in advance. I elected to install the gear wells first and fit engine and cowling after. Follow the directions here! The cowling panels have the hold down releases molded on them. It’s really tough to fit them when the wing halves are glued. I also found a need to clamp at the nacelle joints to get them to fit tight. If you want the slats open, you have to cut some sections off the wing edges. These sections are pre-molded with a slot to drop your knife in. They came off right on the panel lines in a matter of minutes. Speaking of landing gear, the wells and landing gear are models in themselves. The gear wells have formers as separate parts and the gear legs are beautifully cast and engineered to fit flawlessly. It’s a shame you can’t see more of them when the model is sitting. Everything else fit like clock work. Only putty needed was on the fuselage side in front of wing leading edge which is probably my fault. On a side note, I find “universal” instructions at times confusing with symbols representing everything and the sided parts shown for example as 4 (5) where one number is the side your working and the number in the parenthesis the other. This order was not consistently applied in the instruction sheet which caused me to pause more than once.

The kit provides two yellow nosed, shark mouthed schemes. One Luftwaffe machine of 6/ZG 76 in Greece in 1941 and the other a 4/ZG 76 based in Raschid Iraq with German marking over painted and Iraqi national insignias applied. The instruction paint guide is rendered in tones of blue and grey as opposed to full color views. While the later would have been nice, the instructions are adequate. The paint scheme for both aircraft is an early Luftwaffe standard of RLM 02/71 over RLM 65. The aforementioned yellow goes on the upper nose, cowlings, and rudders and under the wing tips. I did the yellow panels first and masked them. I preshaded all panel lines and recesses with dark grey. The RLM 65 was airbrushed first. Then the RLM 02 and RLM 71 were applied. The mottling was carried down the fuselage sides basically extending the top colors down in the same pattern. The wing tops were hard edge masked and the rest free handed. The canopy sections were masked with Tamiya yellow tape then shot with RLM 66,02,71 in that order.

After a few coats of future to level things up, it was decal time. These are printed by Cartigraph and include everything but the swastikas. Not much to this step as the decals went on with water just fine. The only exception was the shark mouth decals which I used a little solvaset to snug down. Everything was sealed under some Testors flat clear. All the antennas, crew step and pitot tube are finely molded in scale sizes. The pitot tube, part B 12 is not mentioned in the instructions so check your references as it was on the real thing. The RDF loops are PE parts and replicate the real thing as two rings are included which mirror period photos. While prepping the bombs I noticed the color call out is not on the accompanying chart. I did mine in RLM 70 which appears to match the box art color. The last part was a wire antenna pre bent to fit and attached with tiny PE rings that the wire actually fit through. I topped this off with a little exhaust staining, weathering and a stretched sprue antenna.

If you think I was impressed by this kit, you’d be right. In fact I would place this in the top 10 aircraft models I’ve ever built. Granted I’ve never built the Eduard offering but I suspect this kit would give it a run for the money. Speaking of which, my on line search netted this kit for $36 and change which is a good value as everything is there to built an outstanding Bf 110 D-3. Time and again I was impressed to compare photos of the real thing and find the parts and details right there in plastic. Don’t let the canopy masking scare you away. Yes there’s a lot, but the frames are easy to mask even if you have to do it the hard way. Eduard does have a masking set Item EX302 $13.49. As if that’s not enough, they will soon release some detail sets for this kit. One of those precolored, stick on panels would really make a perfect addition here. The number and complexity of the parts reserves this one for the intermediate to advanced modeling crowd. A big THANK YOU to Cyber Hobby/ Dragon-USA for providing the sample and to the IPMS reviews corps for allowing me the pleasure of building it.