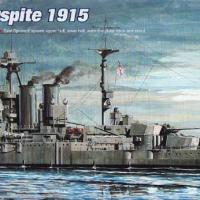 The HMS Warspite was one of the Queen Elizabeth class dreadnaughts launched during the First World War. These were the state of the art battleships of the time and the general soundness of their design shows in the fact that the last of them was not disposed of until the 1950's! They went through many refits that changed their appearance quite a bit over the years. The WWII Warspite has been modeled several times in several scales, most recently in the newly popular 1/350, but never in her WWI fit. The Trumpeter kit is of her appearance when she was launched, thus she joins a very small group of injection kits of WWI ships and I believe the only one as she was during that war. As I build ship models very slowly, this will be a two-part review. This first will be an in the box review and the second will be an actual build. Now, let's open the box and see what we have.

The kit is excellently packed. Each sprue has it's own plastic bag and the ends of some and the more delicate parts of others are even wrapped in foam/bubble wrap. The box contents are; six sprues, a split at the waterline one-piece hull and two parts for the deck (the main and the lower rear), a solid one-piece stand, a small PE fret with funnel caps, underbracing for some mast parts and some surface detail for some superstructure parts, a small decal sheet with flags, a bottom for waterline display, instructions and a color painting guide.

The parts are finely molded with no flash and minimal seam marks. The deck is incredibly busy with all the fittings, vents, lockers, etc. molded on to it and it has a fine raised plank detail on the wooden surfaces. The ship's boats are nicely detailed and two sets of main gun barrels are provided, one with blast bags and one without. The instructions are in Chinese and English and seem clear, but assembly will tell if that's true or not later and the full color painting guide calls out colors in Mr. Hobby, Vallejo, Model Master, Tamiya and Humbrol, so there should be no problem finding the appropriate paints.

Out of the box, this looks to be a very nice kit and as one of the very few (only?) of WWI in injection molding, will be a must have for ship modelers.

Thanks to Stevens Int. and Trumpeter for providing this review sample and IPMS/USA for giving me the opportunity to review it.