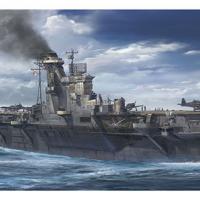 Originally laid down as the luxury liner Kashiwara Maru in 1939, Junyo (along with her sister Hiyo) was part of an IJN subsidized building program of commercial and auxiliary vessels that could be quickly converted into aircraft carriers if the need arose. She was taken in hand by the Navy and commissioned in 1942 in time to participate in the Aleutians invasion in June, part of the overall Midway operation.

From there, she went on to participate in attacks on U.S. naval forces at Guadalcanal, and in the Santa Cruz battle in October, where her aircraft helped sink USS Hornet. She remained in the southwest Pacific covering convoys and the eventual evacuation of Guadalcanal in February, 1943. Torpedoed in November while ferrying aircraft, she returned to Japan, being repaired in time to rejoin to the fleet for the Marianas operation in June, 1944. During the “mission beyond darkness”, she suffered bomb damaged from U.S aircraft, with little to show in return for her pains. Repaired and again returned to the fleet for ferry and transport duties, she was once more torpedoed and forced to limp back to Japan, where repair work was soon halted due to lack of materials. In August, 1945, she was captured by U.S. forces, deemed a constructive total loss and scrapped within two years, a sad end to the once proud Peregrine Falcon.

On first glance, there’s everything here that we’ve come to expect from a Hasegawa ship kit, particularly fine detail and an abundance of extra parts. By now I’ve figured out that Hasegawa (along with some of the other major ship kit manufacturers) cast certain parts in bulk, like parts trees for ship’s boats, or small automatic weapons, or various fittings, and packages them for use in each of the kits of vessels that used them. That’s the case here, and what that inevitably means is that there will be lots of leftover parts.

As always, even the smallest parts are well done, with meticulous fine detail, and little or no flash or sink marks. This is particularly evident when one examines the hull with its abundance of molded on detail, from the minute degausing cable to the very fine vent screens. The hull plating is all subtly recessed, and there is even a very faint raised line to indicate the waterline, to ease painting, or water-lining the model for a diorama. The hull pieces have what appear to be slight mold seams running top to bottom in a couple of places on each one, but these should be easily removed with light sanding. The two piece hull (left and right halves) is reinforced with a half dozed perpendicular inter-hull support pieces.

The flight deck comes in four major pieces - metal foredeck, two wooden deck sections, and an aft metal deck section. There is an under-deck attachment piece connecting the two wood plank sections to add additional support. The elevators are molded as separate pieces, with an oversized under-deck support piece to hold each one in place. The subtle flight deck planking is not overdone, with very minute tie-down indentions indicated. There are no hanger decks (most Japanese carriers generally had two) nor any elevator wells to lower the elevators into.

One of the highlights of this kit is the inclusion of new aircraft types used later in the Pacific War. There are an abundance of B5N Kates, D3A Vals and A6M2 Zeros from several manufacturers currently available to populate the decks of early war carriers. Now, included in this kit are 3 each B6N Jills, D4Y2 Judys, A6M5 Zeros, along with A6M2 Zeros (to be fair, Fujimi included Jills and Zeke 52s in their Zuikaku kit, but there were only two of each, and I haven’t seen them released as separate sets). The engraved panel lines in these small aircraft, while still slightly over scale, are not nearly as overdone as some I’ve seen. The landing gear are exceptionally well done, with the strut easily discernible from the gear door on these single piece parts. The Jills have optional bombs or torpedoes, and the Zeke 21s two bomb options as well as wing drop tanks. All the aircraft are molded in grey plastic, with separate clear canopy pieces. Each also has a prop spinner with attached blades, and a spinner without blades, to replicate a spinning propeller. There is an extensive dedicated decal sheet included just for the aircraft. This is the exact same set of aircraft that Hasagawa sells separately (an additional set was also included in my review package). Considering that a total of 12 aircraft come with the kit - out of a compliment of over 50 on board for the Marianas operation - having an extra set or two goes a long way towards presenting a realistic strike on deck.

The kit also includes some nice extras like a metal anchor chain, and full scale painting and rigging diagrams. Hasegawa has also added a large print of the box art, “suitable for framing”.

There’s been some speculation within ship building discussion groups as to whether or not Hasegawa will eventually produce a earlier a version (i.e a 1942 Santa Cruz version) of either Junyo or her sister Hiyo. Aside from Hasegawa’s history of doing that with most of the other ships they’ve produced, the instructions could easily lead one to expect that they will. There are several places in the instructions to have you open attachment holes in either the hull or deck for parts placement. This is typically done whenever different versions of the class are to be expected.

The best indication that other versions of Junyo will be forthcoming is the wood deck set that Hasegawa makes, one of which was included with my review. The set includes optional dry transfer markings for Junyo in June, 1944 (this kit), Junyo in October, 1942, and Hiyo in July, 1942. The package also includes six small die cut wood pieces for the 5”AA gun platforms. This will be my first attempt at using wood decks, so I’ll let you know how it works in the full build article. Past experience with using small pieces of Hasegawa wood decks has left me with a positive impression.

Although no photoetch comes with the kit, Hasegawa makes several dedicated PE sets for Junyo, both “basic” and “super” detail up sets in a fashion similar to their Akagi and other ship kits. While somewhat pricy, they are mammothly extensive and leave nothing to the imagination for anyone wishing to do their Junyo up to the nines.

Look for a complete build article in a forthcoming issue of the IPMS USA Journal. My appreciation is extended to IPMS, and to Hasegawa and Hobbico for the opportunity to build and review this exciting new kit.