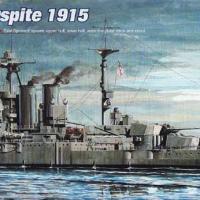 A while back, I did an in-the-box review of this kit (click on the link above) that provided the basic info on what's in the box, etc., but I've now completed the model and thought I'd share that information as well.

Out of the box, this looks like a really nice kit and it falls into two categories that interest me, World War I and British ships, so I wanted to build it as well as I could. In addition, I wanted to try out one of those wooden veneer decks that so enhance the appearance of a finished model, and while a kit of this quality can make an impressive model right out of the box, I wanted to add the basic PE railings to finish it off. Conveniently, I was able to obtain both the PE railings and wood veneer deck from the company Artwox.

I started with the hull. It is in two pieces. The part above the water line consists of the hull sides molded as one piece, so there are no left and right hull sides to glue together. The hull below the water line is one piece. The main deck, which unlike other 1/700 scale ship kits is separate, is in two parts, as the ship is cut down aft. The first parts to be set in place are the hull casemate-mounted 6-inch guns, all twelve of them. They are trapped between the main deck and the hull sides and they are very delicate. These parts all have a seam around their middle and I knew I'd break some of the guns off either during clean-up or in handling the ship during assembly, so I decided to remove them now and replace them with .015 styrene rod later. I snipped off all the barrels, removed the middle seam, drilled small holes in each mount to facilitate putting the rods in later, and glued the mounts in place, keeping the holes aligned appropriately. The two deck parts were then carefully glued into place. By going slowly and gluing in short lengths while holding everything together tightly, there were only one or two places that needed a tiny bit of filler. It really was a very nice fit. Since very little would be needed, I used a latex filler putty that can be smoothed out and the excess removed with a damp Q-Tip. I let that set up and then primered the whole assembly. I found one or two gaps I missed, took care of them, and then re-primered those areas. The paint scheme of this ship at that time was simplicity itself – overall dark sea gray. And since I was going to use the Artwox wood veneer deck which would fit around all the "stuff" on the decks, I didn't have to worry about any masking, so the whole hull and main deck was airbrushed Tester's Model Master Gunship Gray, a very close match.

Past experience has taught me that sometimes deckhouses and superstructures don't fit down tight over their locators on the deck, leaving a gap to be filled. Since I was going to be using the veneer deck, I would not be able to fill such a gap without damaging the deck, so I wanted to make sure beforehand that all those parts fit tightly down. I test-fitted each and, sure enough, several needed work to get a tight fit. On some I thinned walls and on others removed parts of locators to get the parts down completely. Remember, this was a test fitting. Nothing was glued in place. Now came the veneer deck.

As I said, I'd never done one of these before, so I went on a couple of modeling forums and searched the web for help, but little was forthcoming. I was looking for real how-to information, but found only opinions on realism, appearance, and such, so I was on my own.

Let's start by taking a look at the Artwox piece first. It is a very thin wood veneer with the planking printed on the wood and then stained and sealed. Much like a self-stick postage stamp, it is mounted on a backing and has its own adhesive. All the assorted deck "furniture", and there is a lot of it, is accommodated by laser cut openings. I was concerned about this, as there are literally dozens if not hundreds of openings that would have to match up perfectly with the corresponding kit parts. I started with the piece of deck at the bow of the ship as it was a smaller piece, being split off from the rest of the deck by a breakwater. At first, I was afraid the piece would be brittle and break or split, but it was pretty resilient, although I did have to be careful. Once I got it started, it peeled off the backing easily. I did find that it's best to go over all the cut outs lightly first with a new #11 blade as sometimes the cuts do not go through the adhesive, which makes getting the cut outs removed more difficult or leaves behind a sheet of adhesive that gloms up the kit part. When I went to place the deck in place, I started at one end, worked it around a couple of larger kit protrusions to get it aligned, and then walked it down one end to the other. This may sound like an exaggeration, but I was amazed at how well it fit. All those openings fit over all that "stuff" on the deck exactly. After it was in place, I needed to use a blunt instrument (toothpick, end of tweezers, etc,) to push it down firmly around all the "stuff", but once done, it fit perfectly. I then applied the rest of the deck, working from fore to the aft. It even left a little space at the edges for installing railings. When done, it looked great and I didn't have to paint all that fiddly stuff on the deck, either.

From this, I moved on to the deckhouses, superstructure, and turrets. I looked all of them over to see what assemblies I could complete before painting and got that work done. Very little clean-up was needed. I was puzzled by some of the PE parts Trumpeter provides, as usually PE is used for delicate detail parts like radars and such. Trumpeter, however, uses it to augment the detail on the superstructure. It's a different approach, but it does look good once in place. When all assembly was done, I shot it all with the Gunship grey, then assembled the parts to complete the superstructure, but did not glue it in place yet on the hull. Care is needed when doing the foremast as the rear two supports pass through several decks, so alignment is important. Also, you cannot add them later, so you have to be careful to get it right as you go. All the smaller detail parts were now added, and after that the sub-assemblies were glued to the hull.

Trumpeter provides three options for the 15" guns. One is just the barrels, one is the barrels with blast bags, and the last just the blast bags in case you want to add brass replacement barrels. I chose the barrels with blast bags as I just like that look and I didn't want to pay for replacement barrels. Purists will complain that the gun barrels have enlargements at the ends that look like counter balances. These were not on the real thing, so I don't know what Trumpeter was trying to simulate; however, if they bother you, they would be easy to remove. The blast bags are in two parts and a couple seam/fit problems took a little filing and sanding to get them together. I found that you also need to pay some attention to how they go into the turrets to ensure they are aligned correctly. When in place, they needed a little filler at the turret-to-bag joints to seal them completely. I then cut ten pieces of .015 plastic rod to length and glued each in place on one of the 6" gun mounts on the lower hull to replace the gun barrels I had removed earlier.

At this point, you could stop. Even without the veneer deck, you'd have a nice looking model, but I was going to add railings and basic rigging to dress it out. The railings would be generic ones and the rigging would be from stretched sprue. I won't go into either process, as there was nothing in it unique to this model and there are tutorials about these processes on the web.

This is a really nice kit that goes together easily. There were no real problem areas (although care in assembly is required in the turrets and superstructure-to-hull joints), and there is a good level of detail. There aren't many injection kits around of WW I battleships, so this is a welcome addition.

Again, thanks to Stevens International for providing the review sample and IPMS/USA for the opportunity to build it.