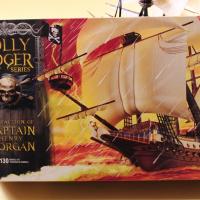 Sir Harry Morgan was a British privateer, buccaneer, and admiral of the Royal Navy. He made himself famous during activities in the Caribbean, primarily raiding Spanish settlements, and was considered a pirate only to the Spanish, whom he was lawfully attacking. He earned a reputation as one of the most notorious and successful privateers in history, and one of the most ruthless among those active along the Spanish Main.

In 1670 Captain Henry Morgan amassed the largest fleet ever seen in the Caribbean and set his sights on Panama City, then the richest city in the Western hemisphere. En route, his flagship, Satisfaction, and four other ships ran aground on the Lajas Reef at the base of Fort San Lorenzo, guarding the mouth of the Chagres River, the sole waterway leading to Panama City. Despite the setback, Morgan and his men secured the fort, sailed up the Chagres, and ultimately took Panama City by hacking their way through dense rainforest. The sunken wrecks have just recently been found and are in the process of being excavated.

The kit is produced by Round 2 Models, a well-known company who bought the Lindberg Line and is re-issuing the kits in very colorful packaging. The box art work in outstanding! The scene depicts the Satisfaction in the middle of a storm under full sail. The kit is offered as one of the Jolly Roger Series.

The kit consists of approx. 81 parts and comes on three brown sprues and two white sprues (sails). The parts are nicely molded, but there is a considerable amount of flash and seam lines. All the sprues have large gates. This is to be expected keeping in mind the age of the molds. All the sails come molded in shape with rigging detail. The 8 page instruction sheet shows the suggested assembly through 7 steps starting with the 2 piece hull and deck being assembled, and progressing through the installation of the main deck, masts and sails, and ending with nice rigging diagram.

This kit is a re-box of the older kit. The kit fits together very nicely but filler was required to fill the space from gluing in the decks. When gluing the deck to the hull there is about a 1/8 gap at the stern which required filling. I had no problems with gluing together any of the remaining assemblies except for the premolded ratlines. The fore and mizzenmast ratlines fit okay, but the main mast ratlines do not line up at all. If you align the main mast ratlines to the hull then the tops do not match very well to the crows nest. If you match the ratlines to the crows nest then the lower end covers the deck cannons and gun ports. The ratlines are also too thick. I found the deck cannons to be a little under scale and the rowboat to be over scale. All the pieces did require cleaning up of flash and seam lines. I built this model as depicted in the instructions and per the box art. I did not use the thread that was provided in the kit for the rigging. The thread is very fuzzy and this really would show up after rigging.

I painted the overall ship with Tamiya Brown. I then used artist oils and washes to bring out the wood grain. The detail of the railings I painted red, blue, and gold to match the box art using Tamiya paints. The sails I painted a light tan to match the originals.

Skull and Cross Bone decals are provided for the flags. It is not known if Captain Morgan had a specific pirate flag like some of the other pirate brethren. The decals are printed within register and lay down after a couple of applications of MicroSet. The flags are a little too thick.

There are two pages of suggested rigging. There are also detailed instructions on rig blocks and belaying pins. There is only one spool of black thread provided in the kit. It is very fuzzy and I would recommend using after market thread of various thicknesses and colors to accurately represent both the standing rigging and running rigging of a sailing ship.

Overall the kit is a joy to build and builds into a handsome pirate ship. I would recommend scratch building your own ratlines and flags. This kit is offered as one of the Jolly Roger Series (Satisfaction of Captain Henry Morgan, Jolly Roger, Flying Dutchman, Captain Kidd, Captain Edward Teach Blackbeard).

Back of box
Previous Next