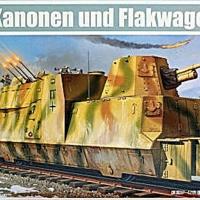 I don't know too much about the history of this vehicle, but being an avid model railroader, it looked like something fun and different to build. Now that the bug has bitten I want to collect the whole series of Armored Rail Cars and make a complete train. This is a typical Trumpeter kit: well packed, with each parts sprue in an individual bag. You get three sheets of photoetch and one sheet of decals. Also included is a section of track to place the finished model on.

Assembly starts with the track section. You will have to make a couple of cuts to the end piece to cap it off. The whole assembly is designed to be added with other assemblies to make up as long of a display base as you need for the amount of cars you have. This is a very nice option. A little putty to smooth the joints was all that was needed. I left the rails off until final painting of the base. The rails were painted with Alclad II steel. I used cat litter for the ballast, held down with white glue, diluted 50:50 with water and a couple drops of liquid "D". After this dried, I slid the rails in place. Then I weathered the whole thing with washes, added a little rust and airbrushed some Floquil Grime for a dirty look. This was all done during the course of building the rail car.

The next step is building the rail car assembly. The wheels were assembled as per instructions. Pay attention to the way you place Part Number D21, these are the suspension holders for the axles. I had mine 90 degrees off. I did have to cut them off and turn them. No big deal. Paint the assemblies before you install them in the hull. I used gunship grey for this. I would suggest you reinforce these when you place them in the hull. I had one come loose and had to fiddle with it to coax it back in place and re-glue it when everything was buttoned up.

The upper hull is next. Another suggestion is to leave off the hand rails Part D20 until you are ready to paint. They are fragile and in the way. I would also suggest adding some internal bracing for the hatches. I used scrap plastic for this. Assembly is pretty straight forward.

I deviated from the sequence of the instructions and continued with the assembly of the hull. Trumpeter has you going to the Flak-38, then to the turret, then to the hull again. I finished with the remainder of the hull. A word of caution, there are a LOT of ejector pin marks. This is especially so on the shields for the Flak-38, so some putty was required to fill these in. Couplers, shock absorbers and the remained of hatches and hinges finished the main assembly.

The Flak-38 is a kit in itself. This was probably the most frustrating part of the build. The instructions are a little vague on some of the parts placement. When it came time to add the photoetch shields they were really vague. The bracing and attachment to the gun carriage was all trial and error. So if some of the parts aren't 100% correct, oh well, looks good to me.

The turret was fairly easy. I lost the photoetch sheet (“Harold the parts monster” must have gotten it) that was made for the turret. I had some pad eyes left over from some other ship building project so they came in handy.

The whole model was painted using Model Master and Floquil paint. I used Floquil "Depot Tan" for the base followed by Model Master “Red Brown" and "Dark Green". A gloss coat was applied for decaling and weathering. The decals went down with no trouble. I used a wash of oils for the recessed areas and dried brush with lighter colors for the raised areas. A final coat of flat to seal everything in was applied. After this has all dried, I came back in with some airbrushed Floquil Grime and dirtied up the bottom and sides. I used silver to highlight the wheels and flanges as they would not be rusty or dirty.

All in all this was very enjoyable model to build and a unique addition to the model collection. I would recommend it to those with a little photoetch experience.

I would like to thank IPMS-USA for the opportunity to build and review this kit and a special thanks to Stevens International for providing the kit for us to review. I can't wait until the next one.

Completed car on rails
Previous Next