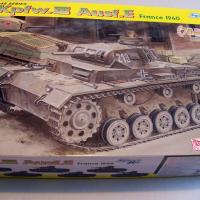 The Pz. Kpfw. III Ausf. E was the first in the series to go into extended production. 96 vehicles were manufactured from December 1938 until October 1939. Additional armor was included, along with the standardization of six road wheels per side, while the main armament consisted of the 37 mm KwK L/46.5, along with two 7.92 mm MG34 mounted in the turret, plus a single 7.92 mm MG34 mounted in the front of the hull. This tank saw service in Poland, France, and Greece.

The kit is molded in the familiar grey, Dragon plastic. There are 23 grey plastic sprues, three clear sprues, the hull bottom and turret, a small photo etch fret, decals and two “metal parts“. The metal parts are packaged separately, and that is nice as these tend to get lost quite easily. The fenders are molded separate from the hull and include fine pattern detail on both the top and bottom surface, and no ejector pin marks. The welded seams are finely molded. The bottom of the hull is detailed with access ports. All tools are molded with clamps in place. All of the crew, transmission and engine hatches can be posed open, but there is no interior detail included.

I always wanted to do a Panzer III in something other than Panzer grey or Afrika Korps sand. I painted the model with Gunze Sango acrylic paints, used an oil wash and Model Master Acryl gloss and flat for the finishing touches. I used highly thinned Tamiya Buff to tone down the colors before the final flat seal coat.

The decals went on over a glossy finish with no problems. I used MicroSol on the turret numbers to get them to lay down over the side view ports. There is no noticeable film whatsoever.

These kits are quite nicely detailed and engineered, and therefore everything fits quite well, but checking the work often will avoid possible problems later. This is my fourth Dragon Pz. Kpfw III, and either the kits are getting better, or I am (??!!). I do believe that Dragon does got a bit far with the number of small parts, total part count and the complicated instructions.

This kit is recommended for the experienced modeler due to the many small parts, detailed subassemblies and complicated instructions/construction. Watch makers and neurosurgeons will enjoy the small subassemblies. This kit will give the builder many hours of pleasure during the assembly process. Good references, plus the occasional peak at the box top, are also recommended to help clarify some of the less than clear details.

I thank Dragon USA and IPMS/USA for the opportunity to build and review this kit.

Box art on bottom of box