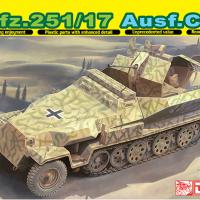 The Sd.Kfz 251/17 was one of Germany’s first attempts to provide air cover for their armored columns in the beginning stages of WW2. Unlike so many of their later AA units, this was not as much of an ad-hoc design, being modified specifically for this role with fold-down sides affording suitable footing for both the gun and the gunners. Germany would not provide another specialty design like this until the advent of the Mobelwagen, Wirbelwind and others much later. I’ve always had a soft spot for these machines, so was delighted to get a chance at this lovely kit.

Like the original, Dragon’s model provides parts not only for the AA refit, but also for a command Funkwagen based on the same chassis. As a result, you not only get a lovely 20mm gun on a pedestal, but a host of detailed radio sets which should prove quite useful if you don’t elect to build this version. In addition, of course, you get the usual plethora of spare parts Dragon always provides.

Building begins with the chassis, naturally, and this includes a few items that seem rather redundant, including a gas tank, oil tank and transmission. Since the model does not come with an engine or engine compartment, these seem somewhat pointless.

Buildup of the complex running gear follows, and I encountered no difficulty with this process, although I would suggest adding the individual track links at this time rather than waiting until later in the build. This will, naturally, be the longest part of the assembly process, but is worth the time with the excellent track links provided. You might also consider doing it the easy way as I did – assembling the tracks around the bogeys, followed by the track shoes when everything has set. There are a couple of minimal options during this stage, with different powertrain wheels offered.

Assembly of the lower body and interior follows, and this is where I first encountered a real bug. The lower body has quite substantial fender slots, which go completely through the shell, creating large gaps in the interior. These, along with some pretty obvious pin marks, means you might find yourself doing a little filling and sanding. That being said, most if not all of these are obscured by the addition of the gun platform. The interior also includes a number of detail and fitting options, one of which is front seats with photoetch springs. The seats at the rear are a bit difficult to install in a realistic manner, as they seem to want to “lounge” against the back wall, tilting them too far back to be completely realistic. After diddling with these a bit I surrendered to the inevitable. As a consequence my miniature gunners are going to be quite relaxed, I suspect. The only other pin marks I had to contend with were on the external rifle mounts that were not much trouble to correct.

The instructions, to a certain degree seem, to have been written in haste, as there are a few missing items here and there and other little glitches. The headlights are even shown installed incorrectly in one panel. However, there isn’t anything that the average modeler can’t puzzle through easily enough.

The 20mm gun is a jewel of a model in and of itself, and comes with several options regarding the gun barrel and shell casing catch. A couple of very finely pressed brass sections make up the shell catch and as such are almost an obligation to include. The kit also provides a generous supply of ammunition for this weapon, including six double boxes, two single cases and four clips – more than enough for any well-equipped machine. In addition, the entire trailer for the gun is included in the kit, meaning you have the basics for scratching a simple ammunition trailer if you so desire. The instructions suggest that you glue four of these ammo boxes to the fold-down sections of the chassis, but this goes against both logic and my Internet search. Having these as part of the operational “floor” for the gunners would mean they’d be tripping over them constantly. Seems more logical that they’d be stored under the gun platform or at the rear of the interior.

Speaking of the gun platform, you might want to avoid my mistake and glue the gun platform into the body only after you have the gun itself completed. There are no guides for its precise location within the interior, and I mounted the platform where it seemed logical for it to be situated, only to discover that I’d set it too far forward. Consequently I can’t pivot the gun toward the front without fouling the shield. In addition, you’ll want to exercise special care if you choose to model the kit with the side shields folded down. The tiny parts that represent the folding catches are quite fragile, and I broke two of them during assembly. One last item – you’ll want to fill in the mounting hole for the rear machine gun. I have yet to see one of these mounted on the real thing – it would interfere with the main gun, I suspect.

Four radios, the bedstead aerial and supplemental equipment are also provided if you go this route, making for a very complete command vehicle. Having found no particularly good references to this vehicle, I can only question whether the gun platform would have been included in this version as they suggest. It seems an unnecessary inclusion in an already crowded interior. However, you still have the issue with those pin marks and fender slots.

As for painting, all my online research showed this vehicle in the early gray scheme so that’s what I opted for. The result is a squat, business-like machine that looks serious. I’ve read some reports that the dimensions are a bit iffy, but frankly, it very much looks like what it’s intended to represent, at least to my eyes.

Overall, this is a fun model to build of a fascinating machine. As always, my very best thanks to both Dragon/USA and IPMS/USA for the chance to add this cool little item to my collection. Wonderful!